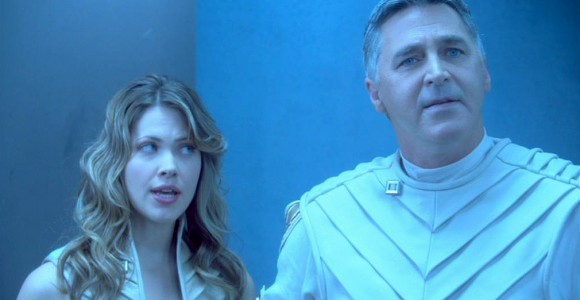 With the Z.P.M. powering Atlantis, minor systems have gradually been reactivated. Among these is a homing beacon designed to guide stray ships back to Atlantis. The Ancient warship Aurora has been targeted on deep space sensors as being located on the edge of the Pegasus Galaxy. Elizabeth Weir enlists the Daedalus to transport Colonel John Sheppard and his team to the vessel.

Once aboard his team finds the entire crew in stasis pods. After Dr. McKay reactivates internal ship life support he realizes that the crew is now so old that removing them from the pods would kill them. But their minds are active. Apparently the crew is sharing conscious thoughts despite the fact that they are in stasis.

With Teyla and Ronon's help, McKay places Sheppard into a stasis pod to communicate with the others, with instructions on how to remove himself at any time.

Once inside the Colonel, in an Ancient uniform, encounters a member of the Aurora crew who says he has entered a restricted area. An escort team takes him to the bridge where Sheppard is introduced to the Captain. It is soon clear that none of the crew realize they are in stasis.

Suspicious of his presence and motives, the Captain orders Sheppard confined to a brig. There, the Colonel pleads his case, making reference of the fact that the Aurora departed Lantean space following the sinking of the city during the Siege. The Captain informs Sheppard that the Aurora crew has a vital piece of information on how to damage Wraith technology. With this in mind the first officer, Trebal, insists that work on the hyperdrive continue so that they can return to the city. Sheppard is left alone.

Eventually he summons the guard and manages to get Trebal's attention. Sheppard insists that they are on the same side, and he wishes to learn the Wraith secret so that he can inform Atlantis himself. Trebal believes he is sincere and promises to speak to the Captain about the matter.

The Daedalus detects the approach of two Wraith cruisers. Fearing that the hive will learn that Atlantis was not destroyed, Colonel Caldwell gives Dr. McKay a half hour before he must pull Sheppard from the system.

Not satisfied with the time he has spent in confinement, Sheppard calls for the guard again and learns that Trebal has given strict orders to ignore the prisoner. Sheppard uses that moment to vanish from the artificial reality. He gives the guard long enough to enter the cell and investigate before Sheppard returns, snatching his weapon and communicator and leaving the guard in the cell.

Teyla and Ronon have bad news. A Wraith has forcibly removed a female Ancient and entered her stasis pod in her stead. A piece of Wraith hardware has also been attached to the system.

Sheppard approaches the Captain in his quarters, hoping to explain things more clearly this time. But Trebal and a security detachment shoot him unconscious. She orders Sheppard returned to his cell and reasserts the importance of their mission to the Captain.

McKay realizes Sheppard may be prevented from leaving because of the Wraith and decides to go in after him, but soon the Aurora security guards seal him in the cell along with Sheppard. McKay exits the system again and uses an interface to unlock the cell and render the guards unconscious. He returns to Sheppard's side and the men escape the brig again.

It does not take long to discover that the Wraith has taken the appearance of First Officer Trebal. McKay accesses the virtual Aurora's systems and discovers that the Wraith has deleted the information pertaining to the weakness in their technology. But it becomes clear why it is interested in the hyperdrive modifications. The Wraith hyperdrives are nowhere near as advanced as Ancient hyperdrives. If it learns how the modifications are made to make hyperdrives from interplanetary to intergalactic, (with the correct coordinates) the Wraith could reach Earth in days.

McKay leaves the system to unplug the Wraith. Just as Sheppard enters the bridge the doctor succeeds, and only then does the Captain realize he has been assisting the enemy. Sheppard informs him of the approach of Wraith craft, and the Captain informs him of what to do next.

Sheppard's team, including the Colonel, is transported back to the Daedalus. John was given the Captain's self destruct code before departing. In the virtual environment, he has gathered his crew together to assure them that their sacrifice will not be forgotten. They are now too old to leave their pods, but they will do some good before the end.

The Aurora is destroyed, taking the cruisers with her.

Back on Atlantis, Sheppard shares a toast to the crew of the Aurora, assured in the fact that the Wraith weakness will be rediscovered.