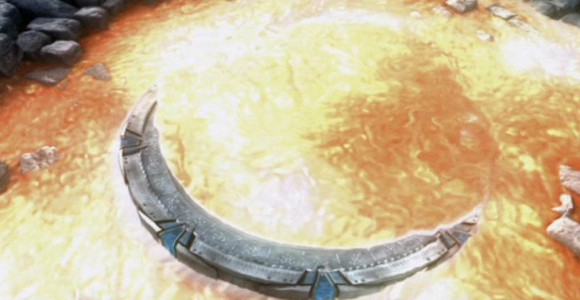 Sheppard's team meets a civilization about to be destroyed by a super-volcano, and is trapped there when the Stargate is destroyed during the evacuation.

Lt. Colonel John Sheppard's team visits a civilization using Ancient technology and buildings. They are surprised to learn that the locals are using the equipment and live in the complex. Taranis is not the usual primitive Pegasus Galaxy world. Taranians have used an Ancient shield to protect themselves from being culled by the Wraith. And so, they have progressed farther than most human societies in the Pegasus Galaxy. The team finds buildings left by the Ancients and a control room similar to the one in Atlantis.

The only problem is that the entire compound is built inside the caldera of a dormant super-volcano. The Ancients used the geothermal energy there to power their city, gambling that the volcano would lie dormant for perhaps hundreds of thousands of years. However, the Taranians have tapped into that energy to run the shield continually at full strength (after discovering increased Wraith activity more than a year ago). McKay tells the beautiful Taranian scientist, Norina Pero, that the shields were never designed to run continuously. The excess power consumption has caused the caldera to grow; it's now 40 miles across.

Earthquakes rock the facility continually. As much as McKay wants to preen before the lovely blonde scientist, he is disturbed by the quakes. Sheppard comforts Norina; McKay is upstaged and jealous.

Deep underground, Taranian Chancellor Lycus shows Sheppard a damaged Ancient warship that looks like the Aurora ("Aurora"). Sheppard hurries back to Atlantis to tell Dr. Elizabeth Weir. It's a good bet that McKay can fix the ship using the schematics brought back from the Aurora – but first he has to fix the Taranians' shield generator.

With so much Ancient technology and a ship at stake, Dr. Weir decides to visit Taranis on a diplomatic mission. A tremendous earthquake rocks the facility during her meeting with the Chancellor. McKay explains that a rift has opened below and now the magma is flowing into it, building up enough pressure to eventually blow up the entire continent. No one seems to understand that Taranis faces an extinction level event. The planet must be evacuated immediately.

Understandably, the Chancellor is suspicious. Tarania has only recently met the Atlantis people and have no way to judge their intent. It appears to be too coincidental that at the time Sheppard's team learned about the Ancient warship, Weir tells the Chancellor to evacuate his world. Dramatically, the ground opens up spewing smoke, collapsing underneath the complex. Weir invites the Taranians to come to Atlantis for refuge.

The more trusting Norina pleads with the Chancellor to believe the analysis, and he relents. Sheppard's team stays behind to handle the evacuation through the Stargate, while Weir escorts the Chancellor back to Atlantis.

As the Taranians move through the Stargate, another earthquake topples the gate into the lava flow while it is connected to Atlantis. McKay frantically sends a last message through the gate to get the shield raised over the event horizon. Otherwise, the red-hot lava would flow into the Atlantis control room. But the Chancellor is now convinced he has been lured into a trap and is a hostage to be exchanged for the warship. Weir reminds him that her people are trapped back on the planet, too.

McKay begins his usual hysterics in the face of certain doom before he can control himself and deal with the situation. Sheppard tries to calm him by saying Weir will send the Daedalus, which is en route to Atlantis. Sheppard orders McKay to try to fix the warship, naming it Orion. Norina is amazed that McKay is knowledgeable enough to fix it, and he arrogantly assures her he is.

Soon enough, the Daedalus arrives. Colonel Steven Caldwell tells Sheppard that the Ancient shield is working too well over the complex. He can't beam out the survivors. And they can't turn it off, as the facility would be immediately overcome. Caldwell's life sign scans indicate too many people to be rescued all at one time; his resources are limited on board. The ship will have to make four trips to save everyone – requiring 12 hours round-trip each. Dr. Carson Beckett does triage on the wounded Taranians to get out the most acute cases first.

Ronon and Teyla work to round up the outlying settlers. Many are too afraid to leave. They think that all they have to do is get far enough away from the volcano. Ronon, Teyla, and Beckett try to explain that the explosion will take out the entire continent. A few remain too stubborn and leave. With everyone else successfully brought into the underground hangar where the Orion is located, the three wait for the return of the Daedalus to evacuate a single family still trapped on the surface. The latest quake has made the route to the Ancient ship impassable.

The ship's shields cannot survive the lava flow under which it is trapped. McKay's new plan is to use the impending explosion itself as their ticket out. The volcano's cataclysm will launch the Orion. By using the shields, McKay can then engage the hyperdrive for a split second to get them into orbit, where they can be saved. The plan is a success, with the Orion leaping into planetary orbit.

The Daedalus arrives in the nick of time to beam out the dying survivors in the barn and rescue the passengers on the Orion.

Although the evacuation was a success, Dr. Radek Zelenka informs Weir that Atlantis's long-range sensors have detected a lone Wraith ship on the way to Atlantis. It is only three weeks away. Even with the new warship and the re-supplied drones ("The Tower"), the city cannot hope to fend off the inevitable Wraith assault, now that they know Atlantis still exists.