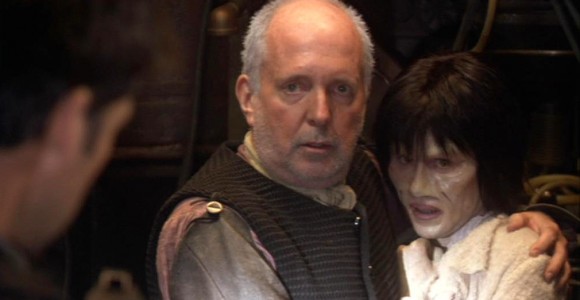 The team discovers a young Wraith girl who has been raised by a human, and is in hiding from the people of her human village in fear of her life.

Colonel John Sheppard's unit enters a village on an uncharted world. The scene is not unlike an old werewolf film, with a cold fog encroaching on the buildings. Entering a bar, they meet several locals, including Goran, who encourages them to move on. Soon the team learns why everyone is indoors. The Daimos is feeding.

The villagers describe the Diamos to be a Wraith, and the unit puts two and two together. Ten years before a ship crashed from the sky. The villagers killed many of the surviving Wraith, but apparently one got away, and it feeds off the village every two or three months.

Almost immediately Ronon gets up to leave. With a single Wraith, he'd be done before breakfast. But Sheppard insists they will all go in the daylight and hunt the creature. The particular forest it lives within stretches one hundred square miles. Teyla soon senses a presence, but cannot help but label it "different" than any she has before encountered.

Ronon sees the creature and they chase it into a nearby cave. Inside, the Wraith – a female juvenile – cowers behind a old human man, who claims to be her "father." Zaddik claims he was with the villagers who killed the Wraith from the downed craft, but when he found an infant Wraith girl he could not kill her. He raised her in an abandoned mine. For some time normal food sufficed, but eventually a hunger arrived that could not be quenched.

Utilizing his extensive knowledge of the natural resources of the woods, he concocted a fluid that would replace the Wraith hunger. Ellia, the Wraith girl, is not a threat. Instead, there is another Wraith that survived and is killing.

Back on Atlantis, Sheppard reports this to Dr. Weir, and Dr. Beckett is very pleased. He intends to travel back to Zaddik's planet to confirm whether or not the drug works and to further his team's research in a Wraith retrovirus, on that would strip the elements of the iratus bug from the human D.N.A.

Beckett returns with Sheppard to the planet. Sheppard speaks with the villagers and ensures them that the hunt is proceeding, and that they should not get involved. But another life has been taken in the light of day. It has occurred within the past two hours (while Ellia has been in the cave), so Zaddik must be telling the truth.

Teyla enlists Ellia's help in searching for the other Wraith. Ellia, resistant, succumbs to the Wraith telepathic link and sees a river. Zaddik tells of a river to the East, and Sheppard, Ronon, and Teyla go out to find it.

While they believe Ellia is in her room, Zaddik shares his concerns for Ellia's future with Dr. Beckett. When he is gone, she will be totally alone. Beckett, not wishing to get his hopes up before, finally tells him about the Wraith retrovirus he and his team have been developing. Still in the early experimental stage, it may eventually help Ellia. Dr. McKay calls them outside to see a mob moving through the forest while Ellia, who was hiding around the corner, finds a sample of the retrovirus and takes it.

When Beckett and McKay go off in the hopes of intercepting the Wraith first, Ellia tells her father what she has been keeping from him. His Ferassin root serum has never worked. Even two years ago when there was an "accident" while he perfected the serum she was still hungry. She eventually learned to sense when the Wraith was feeding and would go out at the same time. She is as equally a killer as any other Wraith. Before his very eyes the retrovirus has the opposite intended effect and mutates her into even more of the iratus bug. Shrieking, she runs out of the caves.

Beckett and McKay encounter the male Wraith, but Ellia intercepts and snaps his neck. She tries to turn on McKay, but Beckett shoots her in the shoulder and scares her away. Meanwhile, Zaddik has entered the forest in his own search for her, and when he does encounter her the two barely recognize each other, she grabs him and throws him across the forest floor.

Eventually Sheppard's unit, including Beckett and McKay, locate him. The village mob that has come to slay the creature heard the shrieks as well. Goran realizes that the man knocked to the earth is Zaddik, his son. Goran says that Zaddik would be only 34, and this is when Zaddik admits that while he was perfecting the serum he allowed Ellia to take what he needed from him. Sheppard asks if she has fed on anyone else, but Zaddik lies for Ellia's sake, saying she has not. Beckett admits there is nothing he can do for him but ease the pain. Soon he is dead.

The team goes out in search of Ellia once more. Teyla fights her in hand-to-hand combat but is disabled. Sheppard orders Ronon to stay with her while he goes off on his own, but when Teyla regains consciousness she tells him to dismiss this order and go help him. Meanwhile Ellia has found Sheppard, and when she gets close enough, taking several gun shot wounds, she begins to feed on his arm. When Ronon arrives the two manage to take her down for good.

Sheppard, whose arm is now bloody, declares that he is fine. Ronon reassures him that they would never have been able to convince her to return with them.