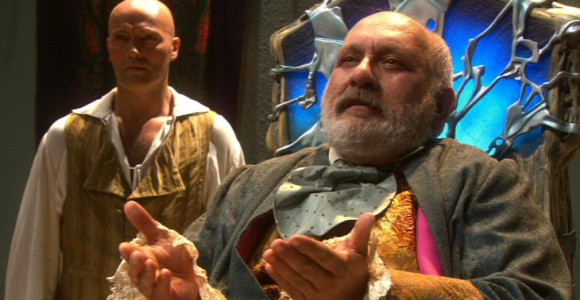 The team finds a world that possesses Ancient defense technology, where Colonel Sheppard finds himself a pawn in the rivalry between the heirs to the throne.

Once again, Lt. Colonel John Sheppard's team is on another apparently primitive, agrarian planet. Rodney McKay thinks it's a waste of time to hope these folks have anything worthwhile to trade. The village leader, Eldred, approaches to apologize for the delay since they have to prepare their tribute to the Tower. The team takes a look at the Tower and realizes that it is a duplicate of the central spire of Atlantis. Now they know this place has something interesting to investigate.

Eldred explains that the Lord Protector can send bright lights against the Wraith ... or the villagers. These bright lights can attack and destroy anything. The team realizes he is describing Ancient drones, of which Atlantis is currently out of stock following the attack on Atlantis. If the drones work, then it is a sure bet there is a working Z.P.M. Sheppard asks to meet the people in the Tower, and is told that only members of the royal court are allowed inside. McKay goes off to take readings of the Tower with a villager.

Soon, guards from the Tower arrive in the village wearing clothes from an more advanced civilization. The Constable of the guards backhands Eldred and pulls out a bullwhip to flog him. Sheppard tries to protect Eldred but another official arrives from the Tower. Otho, the chamberlain, stops the whipping and proceeds to scan the team. The device beeps when it scans Sheppard. Otho orders Sheppard taken to the Tower.

When the team objects, a drone lands and explodes in the village as a demonstration of the Lord Protector's power. Otho explains that the Lord Protector can see what's going on everywhere. Otho threatens another strike if the team doesn't disarm; it's off to the Tower for Sheppard.

From McKay's scans, he decides that the Tower is actually just the visible portion of a buried Ancient city. Over the radio, John confirms that the inside is exactly like Atlantis's control room, but dressed up like an eighteenth century palace. McKay tells him that there is a Z.P.M. – but it's nearly depleted. The city is the same size as Atlantis, just buried.

The Colonel is treated as a guest of honor, and over the radio orders his team to keep a low profile for the night. That evening at dinner, John meets the royal court and the Lord Protector, an aging and ailing man who possesses the Ancient gene and is able to operate the chair, allowing him to activate drone weapons and monitor the nearby villages. His heirs are supercilious fops. Mara, his daughter, is an incorrigible flirt. Tavius, the son, is arrogant and mean. The only thing worse is their table manners.

John inquires about the source of the drones, but no one can answer since no one will go underground to investigate what they call "the catacombs."

Meanwhile, McKay finds a way down into the subterranean part of the city. Baldric, the village guide, tells him the area is prone to earthquakes, which is why people haven't gone down there. Once they enter, a cave-in traps them. McKay looks for another way out and discovers a treasure trove of unused Puddle Jumpers and drones that could resupply Atlantis. He managed to program one of the drones to blast a hole through the roof for a way out.

In the Tower, plotting and scheming are rampant. That night Mara tries to seduce John, telling him that if they are married, succession will fall to her when her father dies. Elsewhere, Tavius plots with Otho. Otho tries to enlist John in his schemes, presumably to save the people and ensure the gene in the succession. But it's a losing battle. The gene is fading more with each generation, despite the chamberlain's best efforts to find the optimum genetic matches for coupling.

Soon, no one will be able to operate the chair and defend their way of life. When he scanned Sheppard in the village he learned that he has the Ancient gene – stronger than it has been recorded in a member of the royal family in over 300 years. If Sheppard marries Mara and fathers children, it will bring the royal court an invaluable new infusion of Ancient genetics.

Dr. Carson Beckett comes to treat the Lord Protector. But he discovers the man has been slowly poisoned over many months. To avert the political crisis, Sheppard tells Otho about Beckett's Ancient gene therapy, which can give at least half the peasants on the planet the ability to operate the chair and defend the planet from the Wraith. Otho himself takes the therapy.

Soon the Lord Protector dies, starting a power struggle for the throne. Emerging to claim the throne himself, the cunning Otho arrests Sheppard, Dr. Beckett, and Tavius. To demonstrate his genetic claim is valid, Otho sits down on the chair throne and launches drones to destroy the village.

Back in the village, Ronon stops the Constable from assaulting a woman. He defeats three of the soldiers single-handedly, cutting the Constable's throat. Though afraid, the villagers decide to defend themselves from the punishment sure to come from the Tower.

Meanwhile, Mara goes to John and brings him his radio. Sheppard and Teyla contact McKay and tell him to stop the attack by draining the last of the Z.P.M's power. McKay initiates the biggest drain of power, the city ship's star drive, which allows an Ancient city to fly. In the nick of time, power runs out and the drones fall to the ground, powerless.

But it also causes a severe earthquake. In the confusion, John escapes and confronts Otho. He attacks the Colonel with a knife, but John wrestles it from him and cuts his hand. Defeated, Otho falls dead from the poison he put on the blade – revealing himself to be the one who poisoned the Lord Protector from the start.

The team returns home, and Atlantis is resupplied with drones and Puddle Jumpers in exchange for medicines and the promise to help the villagers get started on the road to a free society.