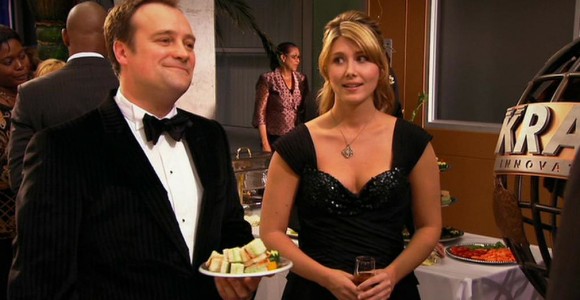 Rodney returns to Earth with Jennifer to witness the triumph of his rival, who believes he has solved the problem of global warming. But when the new technology goes horribly awry, Rodney must help shut down the deadly weather device.

Making buffet selections in the Atlantis mess hall, Lt. Colonel Sheppard and Ronon Dex discuss their annual leave. They are headed to an untouched beach for two weeks of surf and sun. Meanwhile, Dr. Rodney McKay, sitting with Jennifer Keller, is talking about their own leave on Earth. McKay has been invited to a black tie, scientific presentation by an old "friend" and rival, and Keller prods him into asking her to be his date. But despite his groundbreaking work in the Stargate program and Atlantis, he hasn't published anything his colleagues can read for over ten years.

Aboard a private jet sent by project leader Malcolm Tunney, McKay complains about the excellent champagne and the succulent strawberries. Wearing a cocktail dress, the beautiful Keller is determined to enjoy the moment. She asks McKay to relax and enjoy himself.

At his desert facility Terrence Kramer, the wealthy industrialist who is funding Tunney's heretofore secret research, confronts him about the staff's fear of the consequences of turning on the experiment for tomorrow's crowd. Tunney dismisses the concerns, reminding Kramer that the same was said when the CERN supercollider was turned on.

As Tunney prepares for his big day, McKay and Keller arrive for the cocktail and buffet reception. There, they meet two of McKay's more well-known former colleagues: Dr. Bill Nye ("the Science Guy") and Dr. Neil deGrasse Tyson (host of Nova ScienceNow). Wondering if Keller is McKay's sister, the pair tells Keller how McKay was always claiming to be working on whatever good theory someone else published. Keller leads McKay into the lecture hall before he can respond.

The presentation begins with a dour film about the consequences of unchecked global warming. Then Malcolm Tunney takes the stage, revealing that he has a safe method of cooling the planet. Drawing heat from the environment, a massive heat sink will funnel it into another universe via a space-time matter bridge. To demonstrate this, he will turn it on and lower the temperature of this facility by 10 degrees.

McKay is shocked, standing up and claiming before the assembled crowd that he and his sister invented this very device ("McKay and Mrs. Miller"). He tells Malcolm that turning it on here is a very bad idea, as matter bridges are inherently unstable. But no one listens, thinking that Rodney is still acting like his old, attention-seeking self. Tunney initializes the device. As the temperature begins to drop, the audience returns to the lobby for hot chocolate.

Concerned – and certain that his work has been stolen – McKay and Keller locate Tunney's office. Rodney tries to hack into his computer, but when someone approaches they must abort and return to the lobby.

The temperature reaches its target point, but Tunney is informed that the device will not shut down. Kramer wants to cut off the power, but unfortunately the device generates its own power. The containment field around the building can't be lowered to allow people to escape until the matter bridge is collapsed – or they will put the whole planet in danger. The sink will continue to draw heat from the building (and the people in it), so they turn on the furnace to try and buy some time.

Meanwhile, believing that someone has sabotaged his project, Tunney discovers video surveillance footage of McKay accessing his office computer. He brings Rodney and Jennifer into a private room and accuses him of tampering with the system. But instead of learning that McKay is responsible for the current crisis, Tunney finds out that it was based on his old friend's research, after all. McKay has figured out that Tunney got access to a paper he had written on matter bridges thanks to his military contacts, and adjusted the science to his own needs – changing it just enough to make himself feel better, but also ignoring the author's warning that matter bridges are unsafe because they create exotic particles.

Tunney believed that a heat transfer would avoid that problem, but he also ignored the fact that the bridges are inherently unstable. Tunney's guilty expression confirms that he stole McKay's research. Now Rodney may be the only one who can figure out how to shut down the space-time bridge.

McKay proposes crashing the bridge when the energy fluctuations peak. As they work, a new problem besets those in the lobby. A bolt of blue light bursts violently across the room, freezing one of the scientists solid. The "freeze lightening" results from the bridge's sudden demand for power. McKay advocates calling Stargate Command – but Mr. Kramer, fearing that the incident will cost him further military contracts, refuses.

Appalled at their lack of cooperation, Keller insists that the men get help from the assembled geniuses. They determine that dropping the containment field would release the cold air, creating a megastorm outside the building and drawing heat from the rest of the planet. Simply breaking the equipment would cause a tear in time and space. With the temperature now 36 degrees and the containment field emitters weakening, Jennifer convinces Kramer to let her call in the military.

When the furnace fails, Keller tries to get to the land line, but the room is sealed by ice. With the containment field weakened, she attempts a cell phone call – but the connection to Walter Harriman at the S.G.C. doesn't hold. As high winds coalesce into huge tornadoes, McKay realizes how they can turn off the matter bridge: they must create another one. The system won't be able to power both simultaneously, and both will collapse.

Keller is trapped in the corridor and drenched when freeze lightening bursts a water pipe. Security cannot reach her, forcing Rodney to leave Tunney to create the second matter bridge on his own. But by the time he reaches her, Jennifer has passed into unconsciousness from hypothermic shock. Rodney manages to revive her, and she tells him that she is in love with him.

Meanwhile, as tornadoes gather around the facility, Tunney activates the second bridge. It draws all the power and collapses both bridges, just as McKay predicted. True to form, Tunney tells everyone he saved the day.

Grousing about this as they fly back to the S.G.C., McKay briefly considers joining the private sector. Keller, her feelings for McKay in the open, has a more romantic way to spend their last hours alone.