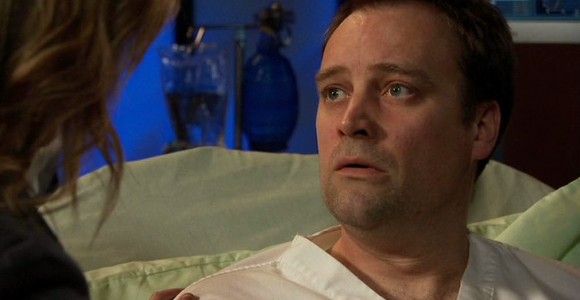 Rodney McKay is stricken with a mental affliction that robs him of his knowledge and memories, causing him to revert to a childlike state.

Jeannie Miller ("McKay and Mrs. Miller") has come to Atlantis via the Daedalus and to say goodbye to her brother, Rodney McKay. She is deeply distressed as she, John Sheppard, Ronon Dex, Richard Woolsey and Dr. Jennifer Keller watch video McKay recorded mere days ago. A disease common among the elderly in the Pegasus Galaxy, called "Second Childhood," has stolen his intellect and his personality. Similar to acute and rapidly advancing Alzheimer's, the disease has left Rodney in a childlike state.

As Keller prepares McKay for his sister's visit, Jeannie learns of the mission to M44-5YN, where this started. Sheppard and his team went to investigate a missed check in from Dr. Nichols. Immediately soaked by rising flood waters, the team sought safety atop the Stargate itself. An ice dam had apparently given way near where Nichols and his team were camped.

By the time they were able to return to Atlantis, some nine hours later, McKay was unconscious. But he recovered quickly and seemed to be back to his normal self – nicer, even. Keller realized later that his stressed immune system provided a parasite the opportunity to take hold in his brain. It didn't kill the cells, but rather suppressed them. The recordings documented McKay's slide into the childish state Jeannie now sees.

Jeannie tries to talk to her brother, and is soon overcome with emotion and leaves the isolation room. Ronon is there to comfort her – and to tell her about his plan. At a place called the Shrine of Talus, people such as McKay are restored to their old selves, gaining the chance for just one day to enjoy the company of loved ones and to say goodbye. Ronon is willing to take them there despite the two Wraith hive ships and 10,000 Wraith who have occupied the planet since the Replicator war last year.

Adamant that she can still find a way to save McKay, Dr. Keller refuses to allow this. When asked if he wants to go to the Shrine, McKay is clearly unable to understand. Jeannie, as next of kin, gives the go ahead. Woolsey authorizes the mission, revealing that his own father suffered from Alzheimer's Disease. They send a M.A.L.P. through the gate to check the area on the Wraith-controlled planet, and Wraith ships on the highlands fire immediately. Before it is destroyed, the M.A.L.P. deploys a smokescreen which allows the team's Jumper to exit the wormhole and cloak undetected.

Flying toward the Shrine, Sheppard flashes back to a poignant moment he and McKay shared. Afraid and alone in the days after the disease began to take his mind, McKay bangs frantically on Sheppard's door. Reassuring his friend that everything is OK, Sheppard grabs a six-pack of beer and takes McKay outside to one of the piers. Under the glow of stars and moonlight, McKay tries to tell Sheppard goodbye while he is still in command of his faculties. Sheppard refuses to reciprocate or even accept McKay's gesture – because he will not give up hope.

Once the Jumper is camouflaged, the group hikes to a cave hidden behind a waterfall. Keller, using an Ancient scanner, detects an unknown type of radiation. Teyla touches a carved panel on a column, the source of the unusual energy. Afraid, McKay hesitates to enter the cave. Sheppard gives him a friendly nudge, and as he enters the cave McKay doubles over and screams. Just as suddenly, he stops and is his normal, obnoxious self again.

Having already said his goodbyes, McKay finds no joy in being restored to this state for only a day. He reluctantly agrees to share a last meal with his friends and his sister. But more intrigued by the radiation and the fact that the Shrine actually works, McKay studies the scanner. Keller moves him to the edge of the cave. Immediately, he screams. She realizes that the parasite dampening McKay's brain cells has contracted to protect itself from the radiation. Keller also knows that if McKay leaves the cave, he will die when the organism reasserts its presence.

Now Keller can do what she could not do in Atlantis: surgically remove the much smaller, contracted organism. Unable to return to the city for the appropriate surgical equipment, Sheppard takes Keller to the Jumper where they pick up the Ancient life-signs detector, a drill, her emergency medical kit, and a hammer. While Jeannie converts the life-signs detector into a basic medical scanner, the others talk McKay into this impromptu, but essential, surgery.

Rodney is sedated and, with Sheppard assisting, Keller drills several holes his skull. Studying the images on the scanner, Keller recognizes that the parasite is moving through McKay's brain. Sensing a way out (and away from the radiation), it is headed for one of the holes she just drilled. Warning Ronon to draw his gun, they all watch as the organism emerges. Keller flings it onto the ground, and Ronon dispatches it with a quick shot.

Fully restored to himself, McKay sleeps in the Atlantis infirmary until the conversation between Jeannie and Keller wakes him. Pleased with his progress and his peckishness, Keller goes off to order him a meal.

Throughout the ordeal, Keller has felt responsible for McKay's condition because she was taken in by McKay's sweetness. She remembers his insistence that consuming the fruit cup from his tray constituted having dinner together. In the privacy of her lab, she replays the special moment on Day 6 of his decline ... when he confessed that he has fallen in love with her. Now, as she watches that moment again, she knows he is going to be OK. She knows that now they might have the chance she fought so hard for in the Shrine of Talus.