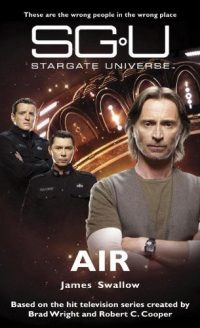 A mismatched group of soldiers and scientists are forced to evacuate to a derelict ship, launched by the Ancients long ago, and must fight to stay alive for another day.

Destiny awaits ... Without food, supplies, or a way home, Colonel Everett Young finds himself in charge of a mission that has gone wrong before it has even begun. Stranded and alone on the far side of the universe, the mismatched team of scientists, technicians, and military personnel have only one objective: staying alive. As personalities clash and desperation takes hold, salvation lies in the hands of Dr. Nicholas Rush, the man responsible for their plight, a man with an agenda of his own... Stargate Universe is the gritty new spin-off of the hit TV shows Stargate SG-1 and Stargate Atlantis. Working from the original screenplay, award-winning author James Swallow has combined the three pilot episodes into this thrilling full-length novel which includes deleted scenes and dialog, making it a must-read for all Stargate fans. From Fandemonium