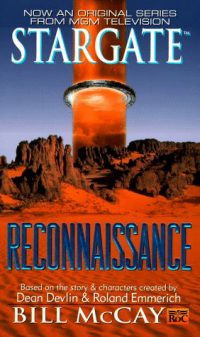 Jack O'Neill and Daniel Jackson seek out a new planet for the Abydan refugees to colonize, only to discover that they may not be alone on their chosen world!

The adventures of Egyptologist Daniel Jackson and marine commando Colonel Jack O'Neil continue in the fourth novel based on the film "StarGate." Survivors of the planet Abydos, destroyed by the power of the StarGate, colonize a new planet -- only to find out they're not alone!

This book takes place several months after the events of Retribution, yet still under two years after the start of the original film.

Months after the defeat of Hathor, the StarGate coordinates found aboard the Boat of a Million Years are to be put to good use. The Abydans are going to get their own new world, the planet Ballas, unknown to Ra and his godlings. Jack O'Neil heads up the first highly-publicized recon of the world, bringing with him Ferretti, Porro, Roberts, and the Abydan translator Imiseba. Daniel Jackson (who is still estranged from Sha'uri, even after their partial reconciliation during Hathor's attack) is there to see them off, as is the President.

Shortly after the return of the recon team, Imiseba, who figures that on a new world the Abydans will need a new leader (he's a power-hungry Abydan of Skaara's generation), starts to go to the press and call for relocation to Ballas immediately, rather than after a few more months of preparation. Public pressure ends up forcing their hand, leading to the mission going ahead to Ballas early.

Once on Ballas, the new settlement is made up of all of the Abydan refugees (including Kasuf, Skaara, and Sha'uri), plus a contingent of U.S. military personnel (O'Neil, Ferretti, and others), and Abydos Foundation head, Daniel. Once there, Imiseba begins pushing his supporters to get rid of the Earthmen, and things start to break into factions all over again, just as on Abydos before Hathor's final assault. On the plus side, the tension eventually leads to Sha'uri to again move toward reconciliation with Daniel. It's a start, at least.

Several weeks after their arrival, with financial support from Earth nearly cut off, a group of Setim come to check out the new settlement, so they can see how hard it might be to set up their own colony on a new world. Then, with the Earth contingent and the Abydan settlers all on the Ballas side of the StarGate, Imiseba's followers try to use C4 to blow up the StarGate, in order to cut themselves off entirely from other worlds and let Imiseba assume leadership of an entirely independent Ballas. Only a surprise attack from a large cat creature that they'd been trying to find, referred to as a "hoodat," stops the destruction of the Gate, as the gunfire of the dissidents alerts the military men to trouble at the Gate. The Gate won't be blown up, and Imiseba's sentiments are out in the open, but the factionalism is still a huge problem, and now they really need to find the hoodat (or hoodats, plural) and kill it.

A team is assembled to begin a hunt for the hoodat(s), only to discover that a cave they think is a hoodat lair is actually an old, buried building with advanced technology, apparently built by Ra's race (which they have taken to calling the "forerunners"). They don't get time to investigate, though. The settlement is set upon by the "hoodats," which aren't feral wildlife, but armored, masked feline warriors of great power, which were apparently on their own recon mission through the StarGate. They were removing technology from the forerunner buildings, but they were cut off from the StarGate with the arrival of the settlement group. Now, they pounce upon the settlers, forcing them to defend the StarGate and the settlement at all costs.

Our heroes are able to stop the cats (mostly), and Daniel even saves Sha'uri, which puts them on much better ground, but one cat gets through the StarGate, and since no one saw their exit coordinates (but the cat probably saw Earth's coordinates because the Gate was basically preset to only need a tiny change to activate for Earth), Earth may now be in danger from the cat race as well. That fact changes O'Neil's latest orders (to evacuate the Earth personnel, leave the Abydans behind, then blow up the StarGate to cut off invaders from getting to Ballas).

In order to protect Ballas, reinforcements are sent (including helicopters, tanks, blast-rifles, and more). The primary reinforcements are Colonel Dale Gunther's 371st Special Operations Capable Marine Expeditionary Unit (SOC-MEU), better known as the "Space Marines," an outfit that debuted during the defense of Earth from Hathor. Among the Space Marines is Abydos alumni Major Adam Kawalsky.

Before the last reinforcements can come through, though, the StarGate becomes active again. The cats are attacking again via the StarGate, and that means a "busy signal" for those on Earth trying to contact Ballas. The Ballas forces are on their own ...

Well, it's not a bad continuation of the series, but after the three-part Rebellion / Retaliation / Retribution story arc, this one sort of falls flat. We see the fallout of Abydans on Earth for over a year, and we get to see the first colonization efforts of a new planet. Heck, we even get a new race of enemies that tie into Ra's background, and we finally get a name for Ra's race, sort of.

However, we also get a story that drags on and on, Daniel at his most self-defeating, and, of course, yet another blasted rank for "Adam Kawalsky, the magical rank-jumping Space Marine."

If you're reading the series, you should continue with this one. There's more background on the history of Ra's race, and it's nice to see the trials and tribulations of starting a new colony. Just don't expect anything even remotely as interesting as the previous three books.

Then again, this book is basically the first part of a two-part story, so perhaps Resistance will pick up the slack from Reconnaissance ...