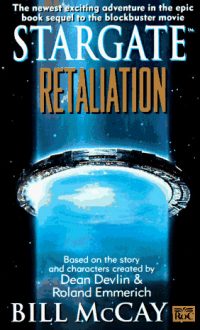 Hathor plots the conquest of the planet Abydos, where chaos reigns in the absence of the alien slavemaster Ra. And her plans extend well beyond the desert world.

Based on the major motion picture event, the action-packed StarGate adventure continues in this explosive story of war over a planet's fate. Colonel O'Neil and Daniel Jackson must now face the terrible revenge of Hathor, Ra's treacherous successor.

Rebellion gave the Abydans their freedom, but unexpected betrayal has endangered new alliances. Now, with chaos in the streets, the time is ripe for the return of the enraged Hathor and her legions. Having bided her time, she plots the reconquest of a world. And this time, she brings a weapon more awesome than any the rebels can imagine -- for Hathor's bloodthirsty plans extend well beyond the Stargate.

This book takes place approximately one week after the events of Rebellion, right around the time that General W.O. West is making his first foray onto Abydos to inspect Ra's Eye.

General West's arrival on Abydos is preceded by the arrival of a group of Horus warriors that rage through the pyramid and Ra's Eye. Two of them, Neb and Khonsu, manage to escape into the crowds outside, evading pursuit by local militia and American military forces (now led by Colonel Jack O'Neil and newly-arrived General West). Thus, our tale begins with two of the enemy hidden away within the Nagadan populace, and they will slowly begin to gather their own rebel force from among the native Abydans to challenge those in Nagada ...

West strikes a new bargain for healthcare and more for the fellahin miners of Nagada, but domestic squabbles rule the day. The farmers from outside Nagada nearly start a riot (as do some of the locals), owing to economic hardships brought on by the influx of the Susan B. Anthony silver dollars and product speculation. Luckily, the militia disperses the crowd. Nakeer, leader of the farming clans, soon meets with Kasuf, and they begin efforts to bring their cultures together for education and supply needs. Even more worrisome on a personal level, Daniel Jackson and his wife, Sha'uri, are now clashing over whether or not to have a child. She wants one now, and he thinks it is the wrong time.

Soon, operations get a boost in the academic direction, with the arrival of Dr. Barbara Shore (remember her from the film?), Dr. Gary Meyers (another film holdover), Operations Technician Mitch Storey, and Professor Peter Auchinloss. Shore, now the head of the StarGate project's civilian arm (with Catherine Langford out of the picture with a broken hip), leads them in studying Ra's Eye. Sha'uri starts working with them, even as Daniel starts teaching new English classes, one of which has a young female student, Faizah, who quickly advances (and hooks up romantically with Meyers, believe it or not), as if she is either gifted, or not all she appears to be.

Soon, Sha'uri becomes jealous of Faizah's place in Daniel's appreciation, and Faizah reveals to Daniel that she's part of a group called Freedom that wants to bury the Gate for a century or so in order to let Abydos develop its own new post-Ra culture without Earth influence. Later, Daniel goes with Faizah to Ezer, a farming village, where she tempts him a bit, but he remains faithful to Sha'uri. While amid a convoy back to Nagada, they are attacked by raiders. The raiders are defeated, but in the conflict, Faizah acts as a fierce warrior ...one that Daniel recognizes, but can't place.

When Daniel returns, he causes a stir by arguing for a new government of some kind for all of Abydos, but it just makes Sha'uri more angry and upsets the political situation even more. Trying to salvage things, he convinces Kasuf to, essentially, call for a Constitutional Convention in Nagada soon. Talks between Kasuf and Nakeer are violently interrupted, though, as, very soon, both Kasuf and Nakeer are gunned down during a meeting. Kasuf manages to survive, but Daniel is framed with Nakeer's murder.

As Daniel is hunted, Faizah takes him to safety in a safehouse-like structure, even as Horus guards emerge from the Gate again and begin attacking at the pyramid. As for Daniel, he's alone with Faizah ...who promptly knocks him out when she sees that he wears Ra's medallion (sent back with Shore from Catherine after Jackson sent it back in the film). Faizah ...is Hathor!

Back at the pyramid, Sha'uri and Shore, along with several Marines, take out the first Horus group, but expect more coming. As more come through and attack, the Abydans and Earth men again turn to fight a common enemy. Meanwhile, Daniel is taken by Hathor and her secret force, including Khonsu. They enter the StarGate room, then use the Eye of Ra medallion, which is actually a means of interacting with other secret coordinates in the StarGate system, to travel to a huge battleship of Ra's (the Boat of a Million Years), waiting in space. It is apparently crewed by slumbering furred creatures, all of whom look like the Egyptian god Set. It turns out that these creatures are the Setim, Ra's original workforce, those that built the StarGates, whom Hathor had exterminated on Ombos, except, apparently, for these remaining few.

Back on Abydos, Kawalsky and Ferretti, previously recalled to Earth, emerge through the Gate, clad as Horus guards, then wipe out several enemy guards (with the help of, among other things, some U.S. military "blast-rifles" that are augmented with blast-lance technology). Meanwhile, Daniel figures out the StarGate origin symbol for the Boat and escapes to Abydos, only to be imprisoned for his supposed role in the murder of Nakeer and attack on Kasuf. No one will believe him that Hathor is now on her way to Abydos aboard the mighty warship, which she purported to be a planet-killer.

Finally, Hathor arrives in the Boat to attack. The scientists set Daniel free, and he helps gather people, but it becomes a race to get as many people as possible through the StarGate. They manage to get most of the key players through (no notable deaths among usual cast of characters), but then Hathor fires upon Ra's Eye, destroying it, the pyramid, and pretty much the planet Abydos. The immediate threat of Hathor sending forces through the StarGate from Abydos to Earth is over ...but she has access to other StarGates, and now she has a planet-killing ship. Earth had better get ready, both for her and for a ton of Abydan refugees ...

Much better than Rebellion, Retaliation focuses far more on the struggle between the Abydan/Earth forces and Hathor's forces. The human interaction was a bit more down-to-earth, particularly in dealing with the issues of poverty, economic depression, and perceived infidelity. The political squabbling of the "godlets" was sorely missed in this one, as it was so interesting in the previous novel, but it is made up for by the revelation of the Eye of Ra as being more than a trinket, but in fact being the key to an immense planet-killing super-ship, made by Ra's alien race.

What sets this one apart, really, though, is the cliffhanger ending. Oh, sure, Hathor was still out there at the end of Rebellion, but Retaliation leaves us with that same sense of an impending enemy starship attack against Earth that we had at the end of Stargate SG-1's Season One episodes "There But For the Grace of God" and "Politics," mixed with the superweapon fears that emerged amid the two-part "Lost City" finale.

And who in their right mind would ever have expected that Abydos would be wiped out in the novel series? Granted, Anubis did so in Stargate SG-1 continuity, but it's quite something to realize that someone else -- Bill McCay -- decimated the world for another StarGate continuity first, years earlier. I'm now on the edge of my seat to begin reading Retribution, the third spin-off book by McCay.