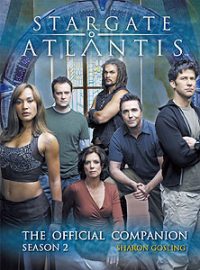 The companion to the second season of Stargate Atlantis features a behind-the-scenes episode guide, cast and crew interviews, photos, and more.

Spinning off from the blockbuster movie, a new Stargate team embarks on a dangerous mission to a distant galaxy, where they discover a mythical lost city and a deadly new enemy -- the Wraith. This is the official companion to the second season of Stargate Atlantis, packed with behind the scenes interviews, an episode guide and scores of photos, including a 16-page colour gallery. First there was the blockbuster "Stargate" movie, then the smash hit TV series Stargate SG-1 (now entering its ninth season), and now there's the equally successful spin-off show: Stargate Atlantis! The Stargate Atlantis team, now based in the mythical Lost City in a distant galaxy, have made friends and enemies, including the deadly Wraith, in equal measure. The second season brings new faces and alliances, as well as new planets and new alien encounters, but all delivered with the same irresistible brand of Stargate adventure! From Titan Books