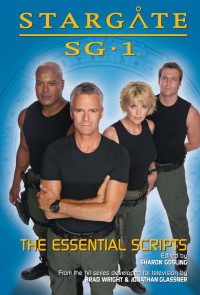 Here's a bumper selection of six of the very best scripts from the smash hit show Stargate SG-1, including introductions, interviews, and commentary.

The first ever publication of scripts from Stargate SG-1, the hit TV series spin-off from the blockbuster action-adventure movie "Stargate!" Colonel Jack O'Neill, leader of an elite military team, tries to learn the secrets of the Stargate, a mysterious ancient portal that allows instantaneous travel to remote planets throughout the universe. After three best-selling episode guides, here's a bumper selection of six of the very best scripts from the smash hit show, now in its eighth season. Far more than just a script book, it's packed with bonus material including an in-depth introduction about writing for the show, cut scenes, commentary and background, and exclusive interviews with the writers as they give their own unique takes on the scripts! From Titan Books

Scripts include: "The Torment of Tantalus" "The Fifth Race" "Window of Opportunity" "2010" "Wormhole X-Treme!" "Abyss"