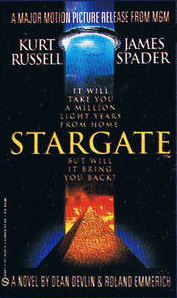 A misfit archaeologist joins a military team in travelling through an ancient doorway to a far-away planet, where they must liberate an enslaved people from a powerful false god.

Obviously, this novelization of the Stargate film not only takes place during the original movie ... it is the original movie. For fans of Stargate SG-1, this would be about a year before "Children of the Gods," but that date really has no relevance here. GateWorld's analysis will be treating the Stargate novelization as it was originally treated, as the starting point for the first official continuation of the Stargate story, the novel series by Bill McCay, published by Roc Science Fiction (a division of Penguin Books, just like the novelization's Signet imprint).

This "setting," then, is a sort of alternate universe to what we're used to. Herein, we'll find numerous new spellings for various characters and devices, plus a very different political organization of the galaxy. You're in for a treat, or a mind-bending experience, depending on how focused you are on Stargate SG-1 canon.

Just like the film's latter DVD releases, the novelization begins in ancient Egypt, where a boy named Ra is taken by the alien we will come to know as Ra. (In the eyes of SG-1 fans, the "Goa'uld that we will come to know as Ra," but in this novel series, the term "Goa'uld" doesn't even exist. We'll later know Ra's race here as the "forerunners" or the "Predecessors.") It then leaps ahead to where we're used to the story starting, 1928 Egypt, where Professor Langsford and his daughter, Catherine, are privy to the discovery of the StarGate (spelled here in the novelization's manner) and (yes, as in the latter DVD releases) the crushed form of an Anubis guard (yes, Anubis the jackal-headed guard as in the film, not the super-villain of Seasons 6+ of Stargate SG-1, and since we see another Anubis later, we'll refer to the crushed one as Anubis I).

The story proceeds mostly as we're used to. Daniel Jackson discovers how to activate the StarGate, and, on orders from General West, Daniel accompanies a team led by USMC Col. Jonathan "Jack" O'Neil (and including Lt. Col. Adam Kawalsky and Lt. Ferretti), though the gate to an Egypt-esque world. A chance encounter with a mastadge leads them to the slave settlement (Nagada) run by Kasuf, where they also meet his daughter, Sha'uri, and his son, Skaara. During their stay with the natives, Daniel inadvertently marries Sha'uri, Skaara starts looking up to Jack, and the team back at the StarGate pyramid gets assaulted by the current Anubis (we'll call him Anubis II -- credited in the feature film as "Inubis") and Horus guards when the alien Ra lands his pyramid ship right on top of the pyramid, routing the human invaders.

The rest of the team learn what has happened, then also learn the StarGate address to get them back to Earth, but now have to fight their way to the StarGate if they intend on getting home. They soon learn the back-story of how an alien, the last of his race (supposedly), came to Earth and took a boy (Ra) as his host, then used human slaves from Earth to work mines on this other planet via the StarGate. The humans on Earth rebelled and shut Ra off from the planet. (In this version of the story, Ra was not the name of the alien himself, nor did the alien take on the persona of a pre-existing Sun God named Ra, but, instead, the boy was named Ra, and he became the first pharaoh, Ra, who was later believed to have been both a human pharaoh and the Sun God. Got all that?)

So, O'Neil and Daniel go with a group back to the Gate. They get captured. The presence of O'Neil's nuclear weapon is revealed, then Daniel, of course, learns of the new plan to send it through the Gate with some of the Gate mineral (never named naquadah in the film or novels) to blow up Earth. At the "execution" of O'Neil and the others, Daniel and the Nagadan boys save everyone, retreating back to the village (which had been attacked by Ra's forces).

As attacks are carried out on Ra's forces, another group, led by Jack and Daniel, enters the pyramid to stop the bomb. As Jack tries to do so, Sha'uri is shot by Anubis II, forcing Daniel to take her to Ra's sarcophagus to be resurrected, where he has to face off with Ra. Meanwhile, Jack takes on Anubis II below, finally "beaming" his head up (and "beaming" Daniel and Sha'uri down to him), just in time to send the bomb up to Ra's ship as it lifts off, destroying it (and him).

And, of course, in the end, O'Neil and his men return home, except for Daniel, who will stay with the newly-liberated Nagadans.

As far as novelizations of films go, this one is a real treat. Yeah, it has a few things that are glaringly different between it and the Stargate SG-1 continuity, but, then, so does the movie itself. That's the peril of having a continuation made by someone other than the original creators.

The novelization, for its part, adds more depth, more backstory, and certainly more characterization than the film itself, making it a fun read. Not a lot of surprises, of course, but that's to be expected from any film novelization. The real fun starts in Stargate: Rebellion, the first spin-off novel in Bill McCay's original continuation of the film's storylines, published years before Stargate SG-1 was conceived.