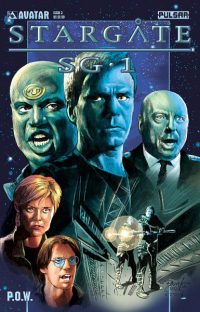 Colonel O'Neill finds himself a Goa'uld prisoner on a distant world, and Stargate Command must mount a dangerous rescue mission.

Colonel Jack O'Neill is a Goa'uld prisoner of war. And his memories of the S.G.C., Earth, and it's defenses are going to be pulled from his head unless SG-1 can rescue him. But with a huge army of Goa'uld defending the mother ship, Hammond has to risk a very dangerous full assault by the forces of the S.G.C. in order to free O'Neill. The result is all-out war! From Avatar Press On P7X-132, Klorel rallies his Jaffa to destroy the enemies of Apophis, while Jack O'Neill is held prisoner in his pyramid base. Meanwhile, a plan is hatched to save him. Stargate Command prepares to send the rest of SG-1, along with Army Rangers, Green Berets, and Navy SEALS, on a mission to disable the ship and save the Colonel. They are also prepping an "Apophis bomb" to blast the pyramid base and disable it. In the base, Klorel -- who refuses to be referred to as Skaara -- tortures Jack. To make matters worse, the S.G.C. mission to save him is ordered scrapped by Senator Kinsey. Samuels delivers the message personally, but since the President outranks Kinsey, Hammond not only keeps the mission on "go" status, but also informs Samuels that the Lieutenant Colonel himself will be going through the Stargate as well. Finally, the mission commences. After a round of gas canisters knock out the gate-guarding Jaffa, our heroes plow through. Samuels has his gun literally blasted from his hand, but he's saved from death. They are soon set upon by death gliders, which they begin blasting from the sky with rocket-propelled grenades. After a quick break-in, the remaining three members of SG-1 save O'Neill in the cell block, and they all get themselves through the gate in time to be out of there, just as the "Apophis bomb" explodes against the pyramid base, disabling it.

As our heroes return home to take care of O'Neill and their other wounded, Skaara begins to shine through Klorel's control, as he plays with the cigarette lighter Jack gave him, muttering the name "O'Neill."