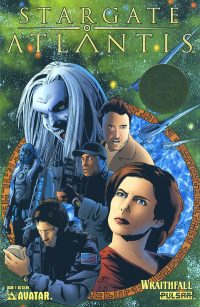 A backwater planet's bizarre deal with the Wraith may offer Major John Sheppard a chance at redemption ... or lead to the utter destruction of the Atlantis team.

The first comics from the hit Sci-Fi Channel series! Stargate Atlantis has just been renewed for a third sense-shattering season, and this three-part all-new epic comic book series is just what those millions of fans have been waiting for!

Far from Earth, an intrepid team of explorers charts the secrets of the Pegasus Galaxy and the lost city of Atlantis. But Major John Sheppard blames himself for the re-emergence of the Wraith, a deadly race of energy-vampires plaguing the entire Pegasus Galaxy. Now, a backwater planet’s bizarre deal with the Wraith may offer Sheppard a chance at redemption … or lead to the utter destruction of the Atlantis team.