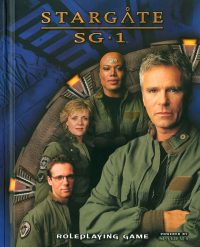 The SG-1 RPG comes with a base rule book and uses the popular "d20" system for paper-based game-play. Several supplemental and expansion books are also available.

Stargate SG-1 is a science fiction role-playing game based on the TV show of the same name. In it, players take the role of an SG team, elite squads of soldiers, scientists and diplomats sent through the Stargate to the alien worlds which lie beyond. There, they must contend with exotic technology, hostile natives, sinister Goa’uld and wary allies, often with only themselves and their teammates to rely on.

The Stargate SG-1 rulebook contains everything a player needs to know in order to run an entire campaign set in the Stargate universe, including a breakdown of the Stargate Program, details on the Goa’uld, Asgard, Tok’ra, and various off-world human cultures, rules for creating characters of every stripe, equipment descriptions, feats and skills, combat and other mechanics, an overview of the first six seasons of the television show, and stats and background materials on Colonel O’Neill and the other members of SG-1.

Suitable for both beginners and experienced players, the Stargate SG-1 role-playing game also makes a valuable resource for fans of the show in general. Filled with full-color images and detailed information unavailable anywhere else, this product is a must-have for gamers and science fiction fans of all varieties!