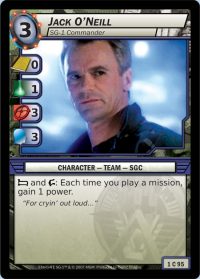 Stargate enters the world of trading card games with this collectible series, which also included a parallel online play environment.

The Stargate TCG immerses players in the vibrant Stargate universe as they assemble their favorite SG characters into teams and send them on missions throughout the galaxy. Breakthrough gameplay allows characters to "learn" from their successes and enhance their abilities as the game progresses. With three unique ways to win and nearly 300 cards in the initial set, players have an endless supply of strategies available as they take on alternating roles of both heroes and villains of the Stargate television series. Each 60-card starter deck includes four team character cards based on the main heroes of the show, such as scientists Samantha Carter and Daniel Jackson, Air Force officer Jack O'Neill, and the alien warrior Teal'c. Each 11-card booster pack contains additional characters, in-game obstacles, new adversaries, and gear for your squad. The debut set of the Stargate Trading Card Game, SG-1, represents the first-ever simultaneous digital and paper trading card game release. The game features robust organized play support and a physical redemption program called "Through the Gate," where players collecting a full set of a particular expansion of digital cards are able to redeem that digital set for a set of corresponding paper cards. From Sony Online Entertainment