Hey, comic fans! GateWorld is pleased to present a special Q&A with William Christensen, Avatar Press’ editor-in-chief. In addition to hit and cutting-edge series like Frank Miller’s Robocop, Avatar is publishing (through its new Pulsar imprint) the brand new Stargate SG-1 comic series. A special preview is now available, and Issue #1 is coming in January, 2004.

GateWorld: How can Stargate SG-1 fans get this comic book series?

William Christensen: “Stargate SG-1: P.O.W.” will be available in comic shops world-wide beginning in January. The way the comic industry works, retailers are compiling their orders for January releases right now. Retailers are taking orders and/or calculating how many copies of “Stargate SG-1 P.O.W.” #1 they’re going to order throughout much of this month (November). So it’s very important for Stargate SG-1 fans to let retailers know as soon as they can that they’re going to be buying this series!

If you don’t know where the local comic retailers are in your area, the industry has set up a Web site and toll-free phone number to help you find them. It’s called the comic shop locator service. You enter your zip code and it returns information for nearby stores. Here’s where you can find the service:

There is a large database of comic stores, particularly in the U.S. — but it has international listings also — available here: http://www.the-master-list.com/. So find a store near you and call or e-mail them to let them know you’re going to be looking for “Stargate SG-1: P.O.W.” Since this is our first Stargate SG-1 series, this support is very important. 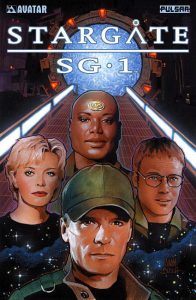 GW: Where in continuity does this series fall, and what characters are involved?

WC: “Stargate SG-1: P.O.W.” takes place during Season One, after the episode “The Nox” and before the season finale, “Within the Serpent’s Grasp.” O’Neill, Teal’c, Carter, and Daniel will all be featured, and the many of the rest of the familiar cast of characters will also be involved. There will be a few surprises showing up also. Colonel Makepeace has a role in this storyline, for example. As for who SG-1 may be facing up against, I won’t reveal that here quite yet … but there are some clues out there.

Here’s the solicitation blurb for the first issue:

The greatest sci-fi show on television comes to comics for the first time in a full-length, action-packed series! Reconnaissance has discovered an alien invasion force with plans of conquest for planet Earth. Caught in a firefight, the escaping team from Stargate Command unknowingly allows a mysterious serpent-headed Goa’uld Lord access into the S.G.C. The invaders lay waste to the debarkation chamber, while locking a naquadah-laced bomb onto the Stargate. In the resulting attack, Colonel Jack O’Neill finds himself on a distant world, face to face with a thousand Goa’uld warriors. With the S.G.C. under lockdown and O’Neill already a prisoner of war, the SG-1 team must find a way to remove a doomsday bomb from the gate and rescue him from a Goa’uld fortress. Join the SG-1 team for a full-force adventure as they fight for survival against a race bent on subjecting the universe to their rule as the gods of legend. Jack O’Neill, Daniel Jackson, Samantha Carter, and Teal’c begin a new chapter of Stargate adventures in the pages of “Stargate SG-1: P.O.W.!”

GW: Who are the creators of this series?

WC: We’ve put together a very good team for this series, one with a great deal of experience with both licensed and science fiction comics. The Issue #1 regular edition cover is by painter Matt Busch, who has done either licensed or production work on a huge number of media properties, including Star Wars, The Matrix, Farscape, and numerous others. Artist Renato Guedes has contributed to DC Comics’ Smallville title. James Anthony has written for First Wave and Battlestar Galactica comics.

I also edit our other Pulsar Press title — Frank Miller’s Robocop — which has been the most successful science fiction licensed comic launches of the past couple years. So I’m very pleased with the mix of experience and talent we’ve got on this first series. 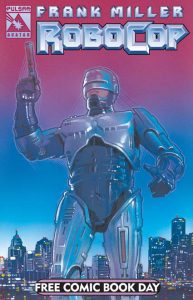 WC: I’m a huge Stargate SG-1 fan. Avatar wouldn’t be doing this if I wasn’t. I’ve also spent a lot of time talking to other Stargate SG-1 fans since we announced this several months ago, and attended the Stargate SG-1 Offworld convention at the end of August as well. And we’ve been promoting the series at a variety of conventions such as the San Diego Comicon International and the Bristol convention in the U.K. this year, so I’ve gotten great input from a legion of fans at shows like that too.

What we do with the Stargate SG-1 comics will in large part be guided by what the audience wants, and I’m confident that we’re in touch with that audience. Anyone who has a comment about any of the Stargate SG-1 projects can contact me directly at [email protected].

GW: When does this series come out, and how long will it run?

WC: “Stargate SG-1: P.O.W.” is solicited to begin in January 2004. It’s a 3-issue mini-series, running one issue per month for three months.

GW: Will there be other Stargate SG-1 comics?

WC: Absolutely, yes! The next several Stargate SG-1 projects are already being worked on, and others are in the planning stages. We should be able to make an announcement around the time that “P.O.W.” is coming out.

WC: It’s already been very rewarding to be a part of the Stargate SG-1 fan scene and to be contributing to it. I’ve met a lot of great people and have corresponded with even more, and I’m really looking forward to getting this first Stargate SG-1 comic series out and into stores so everybody can see what we’ve been talking about for the past several months!

As a final comment, I want to emphasize again that it’s important for everybody to let comic stores in their area know that they want these comics. Call ’em up, e-mail them, whatever you can do. I’m extremely pleased with how it’s turned out and can’t wait for everybody else to check it out, too.