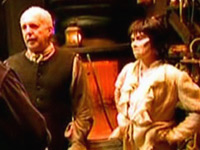 Actress Jewel Staite will play a character unlike any ever seen in the Stargate universe when she appears in “Instinct,” the seventh episode of Stargate Atlantis‘s second season. In a new interview with Stargate-Project, the 23-year-old actress shares her experience — and more about her character, an immature female Wraith.

“Her name is Elia, and she’s very different from other Wraiths,” Staite said. “She was raised by a human, and she has human tendencies and emotions. She’s a very fragile girl who just wants to fit in and be loved. She wants desperately to become a human and she’s terrified of her race and her own Wraith-like instincts. But she can’t help be what she is.”

Getting under the skin of a Wraith was a challenge for the actress, who had never before acted with prosthetics. “They look and act almost reptilian,” she said, “so that was a little hard to master at first, the ‘hissing’ especially. It was really fun, though.”

“She’s been living in hiding, for fear of being discovered and killed by the humans in this village, who are being terrorized by a ‘being’ in the woods with tendencies that are very Wraith-like,” the actress revealed.