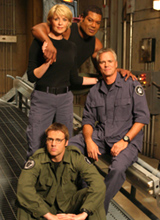 Don’t count Stargate SG-1 out just yet. Though SCI FI Channel has cancelled the long-running series (story), the show’s producers are hard at work looking for a new outlet for the story to continue, executive producer Robert C. Cooper told GateWorld exclusively.

“As far as the future I can’t comment yet because nothing has been confirmed,” Cooper said. “What we want to emphasize is that the franchise is not dying. SG-1 will go on in some way. We’re just not ready to announce how.”

A formal announcement from the studio and the network is expected later this week.

Cooper also emphasizes that, though emotions are running high among Stargate fans who have just learned the news, it is important to keep the show’s ratings strong throughout the remainder of its run on SCI FI. “What’s most important is that fans don’t take out their frustration with SCI FI by not watching,” he said. “In fact, what they need to do is watch both SG-1 and Atlantis LIVE and make sure the ratings stay strong.

“That helps prove to other outlets that might be interested in SG-1 that the show is still as strong as we think it is.”

Could Stargate SG-1 find its way to yet another network in 2007? Or might the SG-1 team be headed for a TV movie, mini-series, direct-to-video feature … or the big screen? Stay with GateWorld for the latest developments.