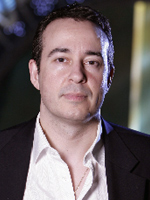 Welcome to a guided tour behind the scenes of Stargate SG-1! Your guide is none other than executive producer Joseph Mallozzi, who will show you everything it takes to create an episode of one of sci-fi’s hottest series at The Bridge Studios in beautiful Vancouver, British Columbia — from idea to outline to script to camera to the airwaves!

Along with writing partner Paul Mullie, Joseph Mallozzi joined the crew of Stargate in Season Four. Together, they have penned such fan-favorite episodes as “Window of Opportunity,” “The Curse,” “Summit” and “Lockdown.” He also maintains a personal blog right here at GateWorld.

Be warned that the pages that follow may contain some spoilers for Stargate‘s first eight seasons, and for what’s to come in Season Nine! GateWorld thanks Joseph Mallozzi for sharing his insider’s view of the Stargate SG-1 production process with the show’s biggest fans.

Whenever guests visit the studio for the first time, I always like to steer them over to the very far end of the second floor production offices. “This,” I inform them as they scan the walls with breathless anticipation, “is where the magic happens.” We take the turn into an unremarkable section of corridor, empty except for a forlorn couch sitting by Brad Wright’s now empty office. Four doors to our right. Three doors to our left. A door at the far end leads out to an odd-smelling wing (I suspect there’s a body entombed in the wall, but our location’s manager insists it’s that “weird carpet odor”), a flight of stairs and, the back entrance.

“Do you feel that?” I ask — to which they’ll glance around, bewildered, and invariably ask: “What?” “Electricity,” I tell them, and immediately usher them over to meet the creative forces that have seeded the countless hours of Stargate SG-1 they have enjoyed over the years.

FIRST STOP: Second to last door on the right.

Damian can usually be found at his desk, staring into the warm blue glow of what I affectionately call his Norwegian Fancywriter computer. A kind and affable fellow, the soft-spoken Damian never passes up the opportunity to take a break from his work to chat. He joined the writing department in Season Six, receiving the invite on the basis of his pitch and script for “The Other Guys.”

He doesn’t get as much notice (or notoriety) as others on staff, but this is changing as evidenced by some recent magazine interviews. I’m sure he appreciates the burgeoning interest but I’m equally certain he can’t help but feel disappointed with the somewhat lackluster titles that have graced those same articles. Michael Shanks got “Shanks for the Memories.” Amanda Tapping got “Get Carter.” Brad Wright got the evergreen “The Wright Stuff.” My writing partner Paul looks forward to the day Damian finally achieves comparable cleverness with: “A Kindler, Gentler Stargate.”

SECOND STOP: Across the hall and to our left.

His door is usually closed because Peter is either out prepping an episode, on set directing, or desperately trying to avoid the company of other writers so he can get some work done. When he’s writing a script, no one is as focused as Peter. Unfortunately for him, no one is quite as magnanimous as Peter either — so if a writer decides to grab a seat in his office for a nice lengthy chitchat, far be it for PDL to ask him to leave. He’s the perfect host: warm, sincere, and boisterously entertaining. Whenever a kid visits the studio, a stop by Peter’s office is a must. PDL’s routine opens with a dead-on Barney imitation, segues into a hilarious highlight package of the numerous oddities decorating his room, then dovetails nicely into his trademark “Pull my finger” gag.

A fan fave, he’s our resident expert on show mythology. When Stargate finally wraps, he’ll no doubt publish that English-Jaffa dictionary he’s been working on all these years.

THIRD STOP: Across the hall, dead ahead.

Peek your head into the office and, more likely than not, it will be empty. The laptop will be on, that cup of tea on the desk still hot and steaming, but Paul will be nowhere in sight. Wait around long enough and he’ll eventually make his way back to the office. Paul is a pacer. He prefers to be on the move when he’s developing stories or running dialogue in his head, walking the halls of the production offices or back lot deep in concentration, brow furrowed, fighting to get those tiny details in his head just right so he can hurry back to the office and get them down (in order to rethink them, abandon them, and ultimately rewrite them at a later date).

FOURTH STOP: Back down the hall the way we came, around the corner and an immediate left.

SUBJECT: Robert Cooper.If you look through the glass wall, past the bust of Greedo sitting on the TV, you’ll see Robert at his desk. More than likely, he’s on the phone. Come back later when he’s hopefully less busy. He’ll still be on the phone. Wait around for him to get off, start talking, the phone will ring and he’ll be back on. It’s to be expected.

With the departure of the ultra-talented Brad Wright, Robert C. Cooper has assumed the mantel of Capo di tutti Capi, the boss of bosses. Now our fearless leader, the hands-on Robert C. or “Coop” as everyone but me likes to call him, fields everything from scheduling conflicts to selecting just the right crew gift. He apologizes. We wave. We’ll come back later. Chances are he’ll still be on the phone.

So ends the tour of the writing department. At this point I will hand off the visitors to the nearest production assistant and they’ll make their way down to set, no doubt grateful for the rescue. And I’ll head back to my office. If I timed it right, it should be just about lunch time …

This, dear readers / fervent fans / casual observers, is our starting-off point to the wonderful world of television production: the writing team. Granted, there are occasions when outsiders will enter our hallowed realm to take up the mantel. Names like Wright, Judge, and Shanks have and / or will continue to adorn the celebrated “Written By” credits. But, for the purposes of this diary, let’s stick to the standing regulars: Rob, Paul, Peter, and myself (let’s call me Montague) as I deliver you a blow by blow breakdown of the production process, from concept to finished episode.

In my next installment, I’ll focus on how ideas are nurtured and fashioned, like simple caterpillars metamorphosed into bright, beautiful butterflies (or mercilessly squashed underfoot) as we audition those presumably brilliant ideas in the harsh, unforgiving arena known as The Room.