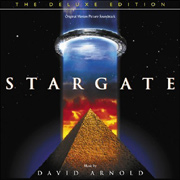 The original soundtrack first released with the movie in 1994 was 65 minutes, “and the musical effect of those precious 8 minutes is like going from a fine dinner to a gourmet feast, bringing out even more wonder at Arnold’s powerhouse score — one that has rarely been equaled since” says iF Magazine, which today reviewed the new CD.

“And having what’s nearly the full, real deal will be a delight to a legion of Stargate fans, as well as film music aficionados whose experience of getting this kind of talent, and gloriously old-fashioned score is like the sci-fi version of watching Haley’s Comet passing overhead.”

Order the Deluxe Edition soundtrack at Amazon.com and Amazon.co.uk now and support GateWorld with your purchase!