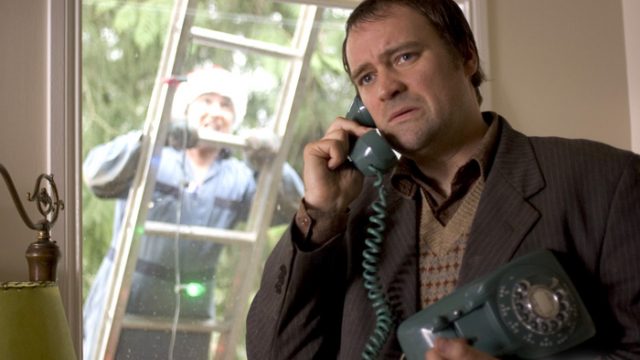 GateWorld is proud to present the first official review of David Hewlett and Jane Loughman’s A Dog’s Breakfast, coinciding with MGM’s acquisition of the picture! The filmmaker giant has agreed to distribute the film for television and video. A release date has not been set, but is closer now than ever before.

Be sure to check out our A Dog’s Breakfast Image Gallery!

For almost a year, Stargate fans like me have been waiting with eager anticipation for the release of David Hewlett’s independent comedy A Dog’s Breakfast, a story about a dysfunctional family who get themselves into, well, a bit of trouble. I knew only this about the plot beforehand, so when I got a preview copy in the mail I was eager to sit down to watch it with my family.

The emotions I experienced … most unexpectedly … went something like this: surprise, delight, shock, goose bumps and a general dose of feel-good. In that order. Hewlett’s directing debut has been well worth the wait. If you’ll pardon the pun, he did an excellent job for a first time out of the gate.

In “A Dog’s Breakfast,” Hewlett plays Patrick, an obsessive-compulsive recluse who has sold most of his family’s possessions online. Everything is relatively stable in his world until his sister Marilyn pays him a visit during the holidays to introduce her brother to her sci fi soap opera star fianc‚, Ryan. Unwilling to put up with the traumatic change in his family life, Patrick makes several attempts to kill the man. But when Ryan has an unfortunate accident, Patrick attempts to dispose of the evidence before his sister can place the blame on him.

The majority of the movie deals with Patrick’s mindset following the decisions he makes relatively early on in the film. The man, incapable of foreseeing the consequences of his actions, finds himself tumbling down a gradual spiral of insanity that rarely abates. To be fair though, he is almost off the deep-end to begin with. The only constants in his life are his dog Mars, a series of spiders that nest on the exterior of his house (which Ryan destroys) and his Internet connection.

Contrary to the plans of the filmmakers, the setting of the film is not Hewlett’s home. Instead the movie was shot at Deer Lake near Burnaby, British Columbia — almost in the middle of nowhere. The setting, which caused a handful of “logistical rewrites,” grants a sense of claustrophobia that intensifies with the progression of the story.

I am unashamed to say that I am no fan of slapstick comedy, which I consider to be low-brow and ridiculous. I confess that, when I went to the film’s official Web site and read that it included a mix of Monty Pythonesque humor, I was turned off a bit. I had high hopes that the film would not degrade into a happy hour with Larry, Curly and Moe.

To my delight, the film is honestly much more. While it is indeed a mix of physical comedy and goofy sound effects (which are at times a bit much), smart storytelling and a good deal of warmth lie at its core. To the greatest extent Hewlett pulls no fast ones when weaving mystery into his film. In fact, upon a second or third viewing everything pretty-much tracked.

I recognized that I had a predisposition toward favoring anything created by people with Atlantis involvement when I learned I would be the first person to officially review the film. It only made sense therefore to view it with the most critical person I know: my Dad … a man who never laughs at anything I find funny nor shares my interest in Atlantis, and could therefore impart a dispassionate critique.

I cannot recall him laughing so much during a film.

I was delighted to discover about midway through the movie that I was actually getting creeped out in some of the darkened scenes. Though I wouldn’t call the piece a “horror” film, it is certainly a dark comedy, with threads of The Telltale Heart and “Mrs. Doubtfire” injected into the film.

To David Hewlett fans: The movie is a must-see. Not because the picture shows off more of his skin than could ever — ever — be revealed in Atlantis; but because fans will appreciate the man beyond his portrayal of Rodney. “A Dog’s Breakfast” reveals that despite certain similarities — from mumbling to himself to screeching like a teenage girl — David can manage to separate himself from McKay to play a convincingly different kind of paranoid man. Having said that, I hope Hewlett will be open to spreading his wings by giving himself a role with a decidedly dissimilar personality than these two characters in future scripts.

From a technical standpoint the film is a flawless success. There are no holes in the editing and the continuity is perfectly linear. (Though when a pair of shoes should be drenched in mud they later appear almost fully white.) Visual cues and other minor details which help progress the plot are kept firmly in check. The visuals, though limited by the location, remain interesting and fresh. Lighting is used to convey the full range of emotional impact. The music, in an “As Good as It Gets” fashion, is never heavy-handed and helps the audience feel sorry for such a damaged human being.

The acting is, for the most part, very real. This is Kate Hewlett’s biggest film role yet, and a trained eye can see she is working to translate stage acting into the cinematic world. Not an easy thing to do. Paul McGillion is at the top of his game, and shows off a pair of nice, meaty stems. Appearances by Rachel Luttrell and Chris Judge grant further delightful bonuses to Stargate fans … but nothing the film requires to remain afloat.

This movie is an unequivocal success, entirely unrelated to its connections to Stargate. The story is richly layered, fresh and fun. The characters are true, and Mars the dog is in full form. It may appear on the surface to be a popcorn romp, but ultimately it is a feel-good film about genuine love, forgiveness and acceptance.

Bottom line? If you don’t check out A Dog’s Breakfast you are simply missing out.