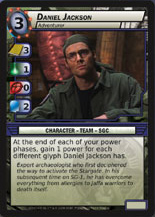 It has been nearly a year and a half since we first reported that Comic Images is creating a collectable trading card game (TCG) based on the Stargate franchise (story) — and now the first details on the game have finally arrived!

The game will ship to stores in February 2007, with 60-card starter decks ($10.99 each) and 11-card booster packs ($3.49 each). The series includes more than 200 collectable cards for a mission-based game, featuring favorite characters and technology from the Stargate universe.

Game play will involve four traits tied to each member of the original SG-1 team, with starter decks available for each: Ingenuity (Jack O’Neill), Science (Samantha Carter), Combat (Teal’c), and Culture (Daniel Jackson). Collectors can pick from one of these starter decks for their favorite character, with decks including four special, all-foil character cards.

Booster packs include cards specific to additional characters, obstacles, adversaries, and gear. Each store display of booster cards will include one ultra-rare foil card — with six different ultra-rare cards in the series. 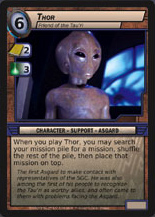 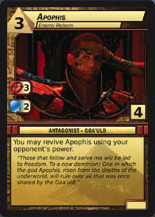 Here’s the series description from Paizo.com:

Future expansions of the game will include both SG-1 and Atlantis. According to Comic Images, MGM will support future tournament play in addition to the game’s retail presence.

Ask your local comic book or collectables store to order the Stargate trading card game! Stick with GateWorld for the latest news.