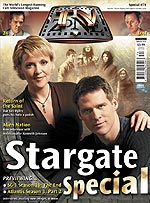 The newest issue of TV Zone magazine is devoted to Stargate — and it’s on news stands now! Special Issue #74 (January 2007) continues the magazine’s long-standing tradition of featuring Stargate once or twice each year.

The issue covers the second half of SG-1‘s tenth season and Atlantis‘s third, with new interviews with:

Also included is a behind-the-scenes look at Atlantis‘s visual effects production, reviews of the season so far, and more.

The magazine carries a news stand price of $9.99 U.S. or £5.99 U.K. In the United States, look for it at major bookstores like Borders or Barnes & Noble.