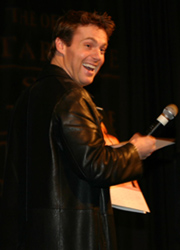 SG-1‘s Michael Shanks (“Daniel Jackson”) and Cliff Simon (“Baal”) will headline all four shows, along with a variety of other guests. (Check out Creation’s Web site for the current lists.) This weekend’s massive event in Vancouver will also feature:

The Vancouver event will also feature an authentic props display room, Stargate location filming tour, celebrity cabaret, dealer’s room, auctions, a trivia competition with GateWorld’s finest (today at 6:30 p.m.!) … and best of all, the rare chance to tour the sets of Stargate SG-1 and Stargate Atlantis at The Bridge Studios.

Stargate Productions, MGM, and Creation will also team up to auction off two walk-on roles for a future Stargate production (Atlantis or the SG-1 movies, to be determined.) Proceeds will go to benefit MAKE-A-WISH.

Stick with GateWorld for full coverage over the weekend and next week, and for the latest news straight from the set of Stargate! If you are already in Vancouver … we’ll see you at the convention!