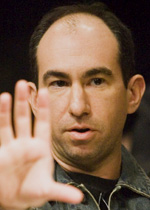 Since the announcement of SG-1‘s two movie storylines this past January (story), fans have been trading hypotheses behind a core question: What is the Ark of Truth?

Besides the fact that it is the title for the first story to emerge from SG-1 post-cancellation (Stargate: The Ark of Truth), the Ark of Truth denotes a valuable device which may turn the tide against the ongoing war with the Ori. Stargate Executive Producer Robert C. Cooper gave GateWorld the inside scoop about this very important artifact.

“I find it a truly fascinating centerpiece,” Cooper said of the Ark itself. “It’s a device that essentially is a — I don’t want to say ‘brain-washing’ — but it can be used to convince you of the truth.”

“Say you believe something,” he said, “and I think that what you believe is wrong. So I program the Ark a certain way and open it and show you the inside, and now you’ll believe the truth — or believe what I’ve programmed.”

Essentially, the Ark is a device capable of brain-washing Priors, Ori proselytizers who bend worshippers to their will.

“One of the Alteran scientists invented this device and said, ‘Look, we can avoid any kind of war by just using this on them and brain-washing them.’ And the rest of the Alterans said, ‘No, that’s just wrong. Philosophically and morally it’s wrong.'”

Instead, the Alterans departed from what is now known as the Ori galaxy, eventually making their way to the Milky Way. “They had a ship, they had weapons, they could have killed the Ori (the people, human beings the Ori). [But] they left. And they came to our galaxy. And history happened the way the series has told us.”

Dr. Daniel Jackson now believes the Ark may still exist. But in search of the device, the team will have to ask themselves the same question the Alterans once faced: “‘Is this morally wrong?’ Even if we do find it, should we use it? Is it the right thing to do to convince the Ori followers that their beliefs are wrong?’

“Because,” Cooper admitted, “it’s not necessarily wrong to believe in something … what’s wrong is to murder somebody because they don’t believe the way you do. So we’re not convincing them not to kill people — we’re actually changing what they believe, if this all works out in the way we think it might.”

Some fans have argued that Stargate technologies like the Ark, the Prior inhibitor and the Kull disruptor have lent to “quick-fix” solutions in stories. However, executive producer Brad Wright has iterated that finding technology to defeat Earth’s enemies has been a staple of the series from the very beginning (interview), and is in fact integrated into SG-1’s standing orders.

Stargate: The Ark of Truth will do what Stargate does best: point a mirror back on its audience. “Philosophically,” Cooper told GateWorld, “it’s a very interesting moral argument, which I think is very current and a very contemporary idea.”

Expect The Ark of Truth to hit store shelves as early as this fall. Until then, stay with GateWorld for more updates!