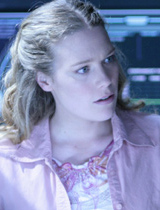 Beware of minor spoilers in the story below!

“It’s less that Jeannie’s back and more that we go to Jeannie,” writer Martin Gero told GateWorld. “It’s almost exclusively an Earth-based episode. I think there’s one scene that takes place — or a couple of scenes that take place — in Atlantis.”

The intergalactic gate bridge, constructed mid-way through Season Three, will be the form of transit for the team. But Gero admits that it is rarely used. “With the galactic bridge in place it’s pretty easy to get back and forth between Earth,” he said. “So one of the things we did want to do this year is have an Earth story or two … That was always [SG-1] territory. Now that they’re not around anymore we feel like we can tell an Earth story every now and again.”

Season Four of Stargate Atlantis will premiere this fall on SCI FI Channel in the U.S. The final two episodes of Season Three air this Friday and next Friday, June 15 and June 22, at 9 p.m. Eastern/Pacific.