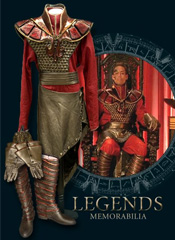 Stargate fans scouring the Internet for rare, one-of-a-kind goods from the Bridge Studios vaults have been watching the Legends Memorabilia Web site, StargateProps.com, for new items, but were coming up short. Now there has been an explosion of new features with promises of much more to come!

“In an exciting new development, we have installed our own auction software on our website at www.stargateprops.com, and this will be the new venue for all of our auctions in the future,” said Legends Memorabilia in a press release. The company had previously been using eBay. “It’s easy, it works great and it’s fun!

Items are now available in the new auction house, including costumes worn by Michael Shanks, Claudia Black, Gary Jones and Peter Williams. In addition to wardrobe, several props are now available as well, including panels of Replicator blocks from Fifth’s ship, and props featured in Stargate: Continuum.

Head on over to StargateProps.com for a look!