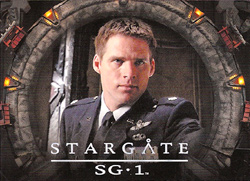 Rittenhouse Archives is in fine form with the newest set of Stargate SG-1 trading cards, now available online and in stores. Season Nine’s high-quality, full-color cards are consistent with previous installments, and continue to demonstrate why Rittenhouse is among the best in its business.

As with past years, Season Nine includes a base set of 72 trading cards. Cards #1 to 3 tile horizontally to form the SG-1 team cast shot. Cards #4 to 63 cover all 20 episodes, with three cards per episode — three different stills, and on the back three segments of text that together tell the story of the full episode. The photos selected generally do a good job of capturing key moments from the story, though of course this is an inexact science. Many — but by no means all — of the pictures will also be familiar to fans who check out episode photos on the Web, including here at GateWorld.

Cards #64 to 69 are standard “Behind the Scenes” cards, including photos such as Ben Browder training for the final fight scene in “Babylon,” Peter DeLuise directing the episode, and Bill Dow preparing for a green screen shot with multiple Samantha Carters. Four of these six cards are from the set of “Babylon,” and the final two are from “Ripple Effect.” Unfortunately, most of the photos aren’t especially interesting, though they do give one an accurate sense of what it’s like to be on set — standing around and waiting!

The final three cards feature close-up shots of Mitchell, Teal’c, and Daniel (respectively) on the front, and together provide a complete series checklist on the back — so collectors can keep track of exactly what they are still missing.

There are 18 cards in the Production Sketches bonus series, which feature one or two black-and-white frames from an early SG-1 episode’s hand-drawn storyboard, with the corresponding color shot from the finished episode on the other side. These are very nice and a surprisingly great addition to the Stargate card line, offering fans a special look at the production process. The storyboard side of the card is flat rather than glossy, giving it an unusual look and texture. Fans can find one of these cards in about one out of every 10 packs.

Nine cards make up the more rare “Book of Origins” subset, with one card in 20 packs. There are seven Cast Poster cards, one in 40 packs, including all five of Season Nine’s main cast members, plus Vala Mal Doran and Jack O’Neill.

There are nine Costume or Relic (Prop) cards, which include a piece of an actual costume (or prop) worn (or used) by the actors on set. One of these rarities will show up about every 40 packs, and while we haven’t seen any from Season Nine yet, we know from past years that these are very cool and unique little items.

Finally, one card in about every 20 packs is hand-signed by an SG-1 actor, including:

It’s disappointing that Browder (who joined the cast in Season Nine) is the only main cast member to sign for this series, but Rittenhouse has made up for it with a large selection of actors who play recurring and other important characters in SG-1‘s ninth year. Fans who have been collecting autograph cards for the previous six years (and perhaps attending conventions) hopefully already have the autographs of the rest of the cast. Only Beau Bridges, who also joined in Season Nine, is conspicuously absent.

The cards are glossy and printed on a nice, heavy card stock, which appears to us to be slightly thicker than past year’s. The episode summaries are thorough and well-done, photo selection is good (no boring shots of people sitting at a conference table), and the bonus sub-sets (from the few we have seen so far) are creative and very well executed.

Rittenhouse provided us with a box of individual cards — 40 packs to a box and five cards per pack, available at retailers for about $2.50 to $3.00 per pack. It took us 23 packs to compile a full base set of 72 cards, leaving 38 duplicates in our card stack.

Five rare cards showed up in those 23 packs, including one of the box’s two autograph cards (Matthew Bennett, who plays Jarrod Kane in “Ethon” — reprising his role from Season Eight’s “Icon”) and four production sketch cards (from Season One’s “The First Commandment,” “Bloodlines,” and “Fire and Water”).

Rather than randomly scattering the 72 base cards throughout each pack, Rittenhouse appears to have a strategy of deliberately configuring the 5-card packs in several different ways. We noticed that the third pack we opened had the same exact five cards as the second pack — meaning that if you are buying individual packs to assemble your set, a new pack may (but not necessarily — there is some crossover) be entirely duplicates, or entirely new.

While it may be irritating to spend up to $3.00 for a pack and not get anything new, such is the danger of collecting one pack at a time. The publisher’s method is actually a smart one that should save collectors a little money in the long-run, since for many it may be a matter of finding the correct pack rather than each individual card. The 23rd and final pack that we opened filled in all five of our missing cards, so that we were never left with just one or two to try and hunt for by opening pack after pack.