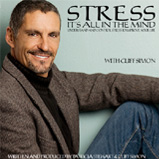 Actor Cliff Simon (“Baal”) recently sat down to update GateWorld on the various projects he has been undertaking, from a meaty appearance in Stargate: Continuum to two audio CDs.

Simon went into detail about the CDs, which he has written along with author Patricia Bertrand. The first, titled “Stress: It’s All In the Mind,” is meant to teach a person how to relax and remain in that state for the rest of the day.

“A lot of people have no idea how to handle stress,” Simon told GateWorld. “It’s from my point of view on how I handle stress and how I use it to my advantage. Everyone feels depressed. We all have things that get us down day by day.

“We can never be totally free of stress, but in this CD I explain a little bit and then I work on deep breathing exercises and relaxation exercises. Making people aware of internal feelings and external feelings, muscle relaxation and all these kinds of things.”

The second CD, entitled “American Affirmation,” is also co-written by Bertrand, who happens to be Canadian. Cliff Simon attained United States citizenship in 2005.

“There’s a lot of negativity in the world about America being the big bully,” Simon told us. “From my point of view as an immigrant, I’ve put it onto CD how I see it through my eyes. America is a great country. America has been the first in just about anything. America has sorted out countries from violence.

Both CDs will make their debut appearance with co-author Patricia Bertrand at the 2008 Creation Vancouver Convention this April, and can be purchased individually for $20 US. To ask Bertrand questions regarding the project, you can e-mail her, or just visit her GateWorld Forum thread!

Information regarding Cliff Simon’s appearance in Stargate: Continuum will be heading your way shortly, including the complete audio interview with the actor. Visit Cliff’s official Web site at CliffSimon.com to see where you can meet him and purchase autographed versions of his CDs!