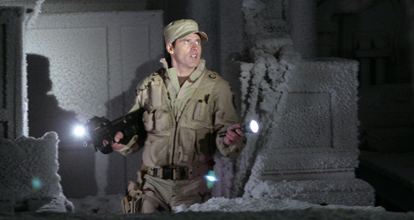 Beware of minor SPOILERS for Stargate: Continuum in the review below — but nothing more than the info already released in MGM’s summary.

While visiting the set of Stargate Atlantis this month, GateWorld’s editors were invited to attend a theatrical screening of the upcoming DVD movie Stargate: Continuum. We entered the theater with high expectations, as long-time Stargate fans who are longing for the glory days of SG-1 and waiting for something to come along and revitalize our enthusiasm for the franchise that we cover day-in and day-out.

We walked away as reborn Stargate fans.

For GateWorld owner Darren Sumner Stargate: Continuum is, simply put, the best movie or episode he has seen in years. It is easily in the top five for all 12 years of Stargate history, and he is still debating whether he may like it more than some of his all-time favorites: “Within the Serpent’s Grasp” / “The Serpent’s Lair,” “The Fifth Race,” “Jolinar’s Memories” / “The Devil You Know,” and “Lost City.” If it is not better than these, if it is not the best Stargate since SG-1 began, Stargate: Continuum is certainly in their company.

For co-editor David Read, Continuum is the best story since the original feature film. Bar none. He has been looking for an excuse to revitalize his love for this growing franchise, and this feature is just the prescription.

GateWorld’s editors enjoyed the recent DVD movie Stargate: The Ark of Truth, but for very different reasons. As the first SG-1 movie it was larger, more theatrical, and had a bigger budget than what we are used to. That film had to wrap up the two-year storyline from the TV series — and so it brought a great deal of baggage. That film is not perfect, but we enjoyed it for what it is.

Continuum is a different sort of film, unencumbered by the need to conclude a longer story. Instead it is a stand-alone story, a classic SG-1 adventure that draws from (and further develops) the mythology of the Stargate universe. If you have friends you want to introduce to Stargate, this is a great way to do it.

The movie is not only for the casual viewer, however. Hardcore fans of the show will appreciate the fine-toothed attention to detail (in both story and a decade of character development), and the extra effort exerted to bring almost a dozen well-known characters from SG-1 back for one more romp.

In addition to action and adventure, Stargate: Continuum is filled with heart and emotion. There are small character moments that just keep coming, and for those of us who have known and loved these characters for so many years, they are deeply touching. As the problem unfolds in the early minutes of the film, there is a palpable sense that this is the greatest problem SG-1 has ever faced — and they may not be able to overcome it. They may not all survive.

What The Ark of Truth lacked, Continuum offers in spades. Characters like Cameron Mitchell take their turn to develop more in this film, and some roles are temporarily reassigned to explore characters like Vala (Qetesh) and Teal’c in brand new, and often unexpected, ways.

Richard Dean Anderson appears once again as General (and Colonel) Jack O’Neill. Though Jack does not drive the story (he is not leading SG-1 here), his part is substantial — much more than a cameo. Even better, Anderson brought his A-game to the movie. This is the Jack O’Neill we love, with all his humor, sarcasm, impatience, and grit.

There are many surprises, from the familiar faces in the opening walk through Stargate Command to the way in which SG-1 is received back on Earth after Baal manages to alter the timeline. The inhabitants of this altered Earth are not under immediate threat, and like their lives the way they are, thank you very much. When Daniel tries to use his personal knowledge of Jack O’Neill’s life to win him over, for example, he is in for a shock.

Continuum shot in the sub-zero temperatures of the Arctic for five days, leading to some epic shots in the movie. There are long shots of Mitchell and Carter walking across the plains of ice which could never have been achieved inside a studio, and the surfacing of the U.S.S. Alexandria is something you won’t ever see outside of the world of special effects.

Speaking of effects — it is hard to look at Continuum and believe that the movie was made for under $10 million, since theatrical releases with these effects typically cost ten times that. Effects that are familiar to SG-1 viewers are taken to a dramatic extreme (such as the sheer number of Ha’tak motherships crammed into a single shot). And there are feature-quality shots that fans have never seen on the television show. Most noteworthy is the effect of an active Stargate on a 1939 cargo freighter at sea, and aerial combat between F-15s, Russian Migs, and Goa’uld death gliders.

If Stargate: Continuum is an “audition” for a theatrical feature film, as executive producer Brad Wright calls it, then MGM needs to green-light that movie now. Continuum itself could have had a successful run in theaters, introducing Jack O’Neill, Daniel Jackson, and the rest of SG-1 to a brand new audience. If its production budget is the only thing holding it back, it is a shame. The movie is that good.

Whether you tune in to Stargate for character drama, for space battles, for action sequences, or for classic sci-fi storytelling (like time travel and altered timelines), Stargate: Continuum is the biggest event of the year. It has everything that has brought back viewers for a decade. As a science fiction film it is nearly flawless; as a new installment in the Stargate franchise, it simply does not get any better.

GateWorld was not asked to write this pre-review — in fact, we had to secure special permission to talk about the movie after attending the screening. The opinions expressed here come from the hearts of the editors.