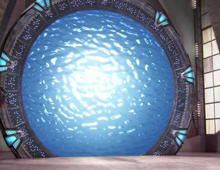 The fifth season of Stargate Atlantis may be kicking off on SCI FI Channel in the United States on July 11.

Though the cable network has not yet officially announced a start date for the new season, July 11 appeared this week on promotional material at the Stargate Atlantis Facebook and MySpace pages. The pages appears to be official MGM promotional outlets.

This would come just three days after the release of Season Four on DVD (story). Also making July a big month for the Stargate franchise is the July 29 release of the next SG-1 movie, Stargate: Continuum.

Season Five kicks off with “Search and Rescue,” picking up where the show’s fourth season cliffhanger (“The Last Man”) left off.

The show will retain its 10 p.m. Eastern/Pacific time slot, if the promotional material pans out.

SCI FI is expected to confirm the premiere date for Season Five in the next month or so. Stay tuned to GateWorld for the latest, and check out our episode guide to find out what is coming!