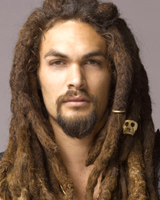 Ronon Dex‘s signature dreadlocks aren’t going anywhere this season, actor Jason Momoa told GateWorld. Momoa has worn the 5-pound-heavy hair for seven years, and secured permission from the producers of Stargate Atlantis to cut off the dreads during the hiatus between Seasons Four and Five.

The plan was to keep the dreads and sew them back on for the first three episodes of the new season, which begins airing in July on SCI FI Channel in the U.S. That process, however, proved easier said than done.

“It took a little over nine hours,” Momoa said. “It was painful, and I didn’t sleep for four days. I grew my hair out when I cut them, and they braided it and sewed my old dreads back in. It looked great — it just took a long time.”

Not only was the re-hairing process painstakingly long, but it was also painful.

“It’s super-painful, and I started getting sores on my head,” the actor confessed. “The first episode I went into [the office of executive producer] John Smith and said, ‘I can’t do this. We have to find another way.’ He was super-cool about it. Everyone was awesome.” In fact, if it had come down to being dismissed from the series, Momoa said, he physically could not continue with the hair attachments.

Jason made it through the end of that first day of shooting, then cut the dreads off again and switched to his stunt wig (normally worn by his stunt double) for two episodes. After that, a $10,000 custom wig was made for the actor — a perfect match for the dreads, though just as heavy as his original hair. He has continued to shoot with the wig throughout the show’s fifth season.

“The beginning of ‘Broken Ties’ is all this [master] wig,” he said. “There is some of my hair in there, which they sewed in to make it look more like my hair. When it came to us it was really clean and kind of dark. By the end of the season it will be perfect, because it has to get dirty and used.”

A scene was scripted for “Broken Ties,” the third episode of the season, in which Ronon’s dreads are cut off in a dramatically tense moment (story). But it won’t make the final episode: despite the show’s producers agreeing to lose the hair and change Ronon’s look, the network ultimately over-ruled the decision.

“SCI FI said no — which is funny because they didn’t want to have Ronon to have dreads in the first place!” Momoa said. “… SCI FI won’t let me cut it until it comes to the point where it is going to hurt my neck — which is basically the reason I wanted to cut it. So it’s going to get to a point where physically I’m going to have to cut this thing off, because it weighs just as much as the other one. But it’s nice that I can go home at night [without it].”