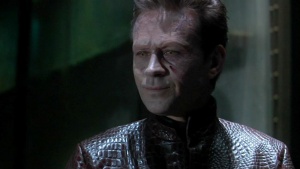 Two Wraith in particular have occupied Atlantis’s attention: Michael and Todd (so nicknamed by John Sheppard, since the Wraith have no names that we know of). Michael is a Wraith-human hybrid created by Atlantis more than two years ago (“Michael”). He was an ordinary Wraith until he was captured by the Atlantis team and treated with a retrovirus devised by Dr. Carson Beckett, from the iratus bug from which the Wraith evolved.

Since the retrovirus effectively wipes a subject’s memory, the plan was to convince the humanized Michael that he was a human being, an officer on Atlantis suffering from amnesia. But Michael eventually learned the truth about himself and rebelled, returning to the Wraith. Without continued treatments, his Wraith side reasserted itself. But because he was now a half-breed Michael was rejected by the Wraith, and so he had no home and no allies.

To create his own loyal followers and soldiers, Michael began experimenting on human beings — using Beckett’s own idea of an iratus bug retrovirus, infecting humans with Wraith genetic material rather than removing it from Wraith (“Vengeance”). He took a DNA sample from Dr. Beckett and cloned him, using Beckett’s skills to further his research. In this way Michael eventually developed a group of hybrids to serve him (“The Kindred”). He has thrown the galaxy into chaos by poisoning the Wraith’s human food supply, putting his former brothers at one another’s throats.

And Michael’s plans go further. He has captured Teyla Emmagan, and plans to use her very special unborn child to perfect his hybrids, defeat the Wraith, and conquer the galaxy.