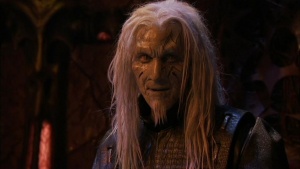 To try and find a cure for the plague unleashed by Michael, the Atlantis team turned to a Wraith scientist they have nicknamed “Todd.” Colonel Sheppard first met this Wraith when the two were imprisoned together by a mutual enemy, Genii Commander Acastus Kolya (“Common Ground”). They worked together to escape, and went their separate ways.

After coming to Atlantis for help, Todd was held prisoner there for several weeks. He worked voluntarily with Dr. McKay to try and find a way to reprogram the Replicators — a technologically advanced race that was destroying human populations in order to defeat the Wraith through attrition. While they never quite succeeded in their task, Todd did help to forge a temporary alliance between Atlantis and the Wraith to attack the Replicators directly.

With the Replicators defeated, the two allies again went their separate ways. But Michael’s new plague forced them to work together once again. Todd and the Wraith needed to purify their tainted food supply, and the Atlantis team wanted to save millions of human lives. Todd remains a member of the enemy species, but one whose interests often seem to ally with our own.