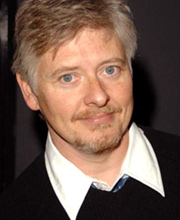 Beware of minor SPOILERS for Season Five’s “Brain Storm” in the report below.

Foley, 45, starred in the sitcom News Radio, and before that was a member of the Canadian sketch comedy show The Kids In the Hall.

Bill Nye has been entertaining and educating kids and adults for years as “the Science Guy,” hosting his own series for nearly a decade.

And Neil deGrasse Tyson holds a Ph.D in astrophysics and hosts the PBS series Nova ScienceNow. He also serves as director of the Hayden Planetarium at the American Museum of Natural History.

While the specific characters these men will play is not yet known, a quick look at our recent spoiler report raises some interesting possibilities. In the episode, Rodney McKay and Jennifer Keller return to Earth to attend a posh scientific demonstration by one of McKay’s old rivals. That role, the character “Malcolm Tunney,” would seem to be a great fit for comedian Foley.

The two Atlantis personnel also bump into scientists named “Ken” and “Steve” at the party, which could be roles for real-life scientists such as Nye and Tyson.

Gero wrote and is currently directing the episode. Learn more in GateWorld’s Season Five episode guide, and watch the “Brain Storm” page for further casting details as they become available.