Beware of SPOILERS for “Brain Storm” in the article below!

What ultimately became the 16th episode of Stargate Atlantis‘s fifth season may have been different, Executive Producer and writer Martin Gero revealed to GateWorld this week.

“We had to do an episode about the environment,” he told us. “We were like, ‘Well, how the s**t are we going to do that? We’re on another planet!'”

Gero always wanted to make his Atlantis directorial debut set on Earth and heavily feature the McKay and Keller characters, but the overall message of the episode needed to be about the cause.

This is not the first time a blanket request from a network has influenced multiple television shows the same way. For example, in May of 1997 ABC issued orders for their shows Home Improvement and The Drew Carey Show to create an episode to be watched with 3D glasses. NBC did the same with Third Rock From the Sun the same week.

“Joe was going to write one that was very, very metaphorically about the environment,” Gero said, “and then I came up with this thing which was a weather device that used the McKay Bridge to channel heat into another dimension.”

In hindsight Martin says he probably still would have set “Brain Storm” on Earth. “I don’t know if it would’ve been a weather device, but I probably would’ve done it on Earth … so we could’ve had Bill Nye and Neil deGrasse Tyson. Bringing all of those people to Atlantis feels like a bit of a stretch, and also the whole MacGuffin of the episode was that [Rodney’s] going to watch a presentation that turns out to be his science.”

Watch for much more discussion on this episode, the controversial McKay/Keller relationship and Stargate Universe in our extensive, 47-minute audio interview with the Atlantis writer/producer in the coming days! 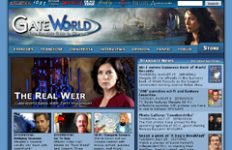