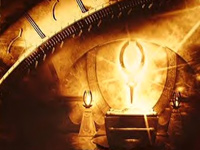 More than a year after its initial release on DVD, Stargate: The Ark of Truth is finally gearing up for its American cable broadcast premiere on the SCI FI Channel.

The Futon Critic is reporting that the initial airing of SG-1’s inaugural full-length film will hit television screens on Friday, March 27 at 9 p.m. (8 Central), immediately following a rebroadcast of the final episode of Battlestar Galactica.

Serving as a conclusion to the Ori storyline that was halted by the cancellation of SG-1 as a series, The Ark of Truth finds the team searching for an artifact that can stop the Ori and their followers once and for all. Along the way, they’ll discover another threat by an old enemy plus a traitor in their midst, and an unexpected source of help.

The airing of Stargate: The Ark of Truth will also mark the first new broadcast of an SG-1-based Stargate production since June of 2007, when “Unending,” SG-1‘s final episode, first aired. The movie is currently available on both DVD and Blu-ray high definition.

SCI FI has also picked up the rights to air Stargate: Continuum, which is expected later this year on the cable channel.

Even though I have it the DVD, I still wanna see how they pull it off. Wow. That’s gonna be cool Friday. Get to watch Ark of Truth…and re-watch final BSG episode. I just hope Skiffy don’t cut too much. :)

I’ve got the DVD also, but I’ll definitely plan to watch it when it airs.
SG1 is a great series!!!

Stargate: The Ark of Truth will make its Australian cable broadcast premiere this coming friday night at 8:30pm on Foxtels Movie One channel…

Good to see that the US *finally* get the TV premiere of Ark of Truth… especially since it’s been shown at least six times since it’s DVD release (as has Continuum). How come SKY were able to show it before SciFi US???

Wow, the Sci-Fi channel is slow. SKY aired both Ark of Truth and Continuum a week before the DVDs were released. They did the same with Battlestar Galactica: Razor. At least you are FINALLY seeing it in the US

In Canada, Space network already aired Ark of Truth sometime in fall if I remember right and they’re airing Continuum on January 30th. It’s a little strange since during most of the run of SG-1 Space was a year behind in airing new episodes.

That’s because we had the DVD release well before the other parts of the world. It’s called marketing strategy.

Still amazed it premièred on sky one last year.
Definatly a bit odd scifi had to wait so long for the sg-1 films yet. however I’m fairly sure, I read here somewhere they won’t have to wait again to air the Atlantis movie when that’s eventually released.

hate to break it to you all, but Ark of Truth is on Movie One here in Aus, i have it recorded on my IQ

I liked ark of truth better than continuum. but i was happy that in continuum they brought Back APOPHIS!!! and Qidesh.!