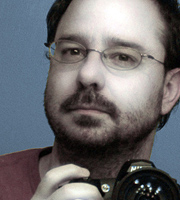 The producers of Stargate Universe are reaching outside the world of television for some creative input, tapping science fiction novelist and freelance writer John Scalzi as a consultant for the series. Scalzi made the announcement today at his blog.

As a consultant Scalzi’s job will be to “assist the producers and directors in shaping the direction of the series, to offer technical writing suggestions and advice, and basically to be useful when they want another point of view on something,” he said. “It’s a background rather than foreground sort of job. No, I won’t be writing for the series at this point; hey, I just got the one gig, let me do that first.”

Born in California, the 39-year-old writer has published such genre novels as Old Man’s War, The Last Colony, and The Android’s Dream. In 2008 he won a Hugo Award in the “Best Fan Writer” category for this blog, Whatever (it’s now a decade old). He currently lives in Ohio.

“Yes, I’ve seen scripts and now know all sorts of stuff about the series you don’t, yet,” he added. “No, I won’t tell you anything more than what’s already out there; my title is ‘creative consultant,’ not ‘dude who leaks stuff.’ Yes, the producers and writers are very smart folks who have a definite idea of what they want SGU to be, and I think it’s a good and intriguing idea with lots of interesting possibilities, which is why I signed on.”

The author also got an early peek at the set of the Ancient deep space exploratory ship, the Destiny. “I also got the tour of the sets, which are still under construction, and which look pretty damn nifty so far,” Scalzi said. “It all went very well, and I liked what they were doing with the show and the people involved, and equally importantly they seemed to like me, too. So I was happy to say yes when they invited me onboard.”

Stargate Universe begins filming next month, and will premiere on the SCI FI Channel in the U.S. this summer.

John Scalzi is a great writer. His input can only help improve the Stargate franchise.

This should prove interesting. Lets see where it goes.

maybe they will hire him as a writer

Never heard of him

well maybe there is still some hope for sgu.

I must say, this guy in sci fi book world is king right now. with robert carlyle and scalzi this can never go wrong. its sad that they ended atlantis though because i wouldve taken atlantis over universe any day.

Considering you haven’t had a chance to see Universe yet … I suppose I would prefer what I know to work any day too.

I’ve read two of Scalzi’s books and never been much impressed. I’ll wait and see.

i agree with US06154! :) going to other people for story help is not a good sign, they should stick with SGA as a series. (I’m one of those insanely angry SGA fans and proud of it :D )

I’m honestly surprised they actually got someone from outside their little club. With them all so comfortable with one another’s work, it would be really easy to never bring in anyone new and risk having a negative viewpoint on how you do things, thereby enabling them to never take a look at their writing faults.

This is good news.

Great writer guy and lucky [email protected]@ if he saw the stuff.

Seriously, I don’t know why anyone is being negative with this. Another viewpoint could never hurt. The writing team is getting pretty old now,some of them working since SG-1. At this point it gets harder and harder to bring in solid good material that doesn’t make fans point to such-and-such episode and say “hey! We saw it there first!” Another viewpoint will definitely help with that and just the show in general.

@AutumnDream, we don’t know if he shares the mentality of the “little club” or not. He’s definitely a middle aged caucasian man like the rest of them, and not someone who can bring the female or ethnic perspective from an experience base. However, many people seem to think he is a very creative writer, and I’m happy that TPTB are reaching out of their inner circle. It seems they are throwing everything but the kitchen sink at this new show, hope it works!

I don’t know John Scalzi’s work but I think it’s a really good thing that TPTB seems to have learn from past mistakes, and realized the need of impartiality, and constructive criticism. I don’t think I’m being overly optimist, and it may augur a really good show. I can only guess, of course.

In a personal note, it’s sad that not even possibly good news like this arouse my interest about SGU at all, but it gives me hope about the SGA movie.

They seem to be pulling out all the stops to make SGU work, new consultants and possible new writers. Why couldnt they have done this for SGA. They refused to try and bring in new creative talent for SGA and then wondered why the fans were loosing interest. Instead of trying to fix their mistakes they cancel the show and dump it’s actors. I don’t care what names they bring into SGU I’ll never watch it because the ptb had a wonderful cast on SGA and just squandered their talent.

About this the consulant: good thing, early risers make tasty cake. Or something like that.