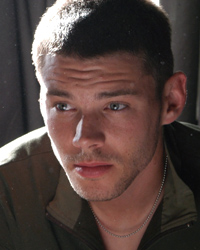 Actor Brian J. Smith has been cast as a series regular in Stargate Universe, GateWorld has learned exclusively. Smith will play the role of Lt. Matthew Scott (formerly Jared Nash).

The studio and network describe Scott as “a junior member of the Stargate team. Green and rough around the edges, he is thrust into the role of leader well before he’s ready for the responsibility and must learn to command, earn respect through action, and manage the diverse personalities aboard the ship.”

A native of Allen, Texas, 27-year-old Smith studied theater in Plano, Texas, and at The Juilliard School Drama Division in New York City. He has appeared in the independent films Hate Crime, Red Hook, and 2009’s The War Boys, and on Broadway in the play Come Back, Little Sheba. According to IMDb, this is his first television role.

In addition to the previously announced series lead, Robert Carlyle (story), MGM and SCI FI are announcing a total of four cast members today — at different entertainment news sites. The full press release will be along tomorrow. We don’t know the other three names yet … so get hunting!

He looks like a cross between Jensen Ackles (Supernatural, also from Texas) and Ryan Kwanten (True Blood). Here’s hoping he brings as much character to SGU that those two bring to their respective shows!

I’m glad he’s not going to be called Jared Nash. It sounded too much like a name someone made up.

he looks cute :D i dont mind watching him

so the hunt begins, well I off to google for the other names.

27 years old? That’s good. I believe that’s older than (or as old as) Michael Shanks when he started on SG1.

I’m so relieved the actors are older than I thought they’d be! Hopefully it will help alleviate some of the teenage drama!

Oh, and I’m really glad they changed Dr. Rush’s name to Nicholas. To me David just sounded too much like Daniel.

Thanks to the GW people for posting their age first, it’s quite amusing to see how wrong the critics were.

He looks like he’ll really fit in in the Stargate world.

Plus he’s very cute too, which always helps :D

A cutey and a Texan? I love him already…

Yay, we get a hottie on Stargate! |) BTW, I created Brian J. Smith’s Wikipedia article: http://en.wikipedia.org/wiki/Brian_J._Smith.

Another generic looking attractive 20 something, that’s just great (said with heavy sarcasm). If it wasn’t for Carlyle I would have lost interest by now.

OK, where are the JW Smith and BJ Smith thunk threads on the forum?
And lil’ Blue too!

Finally.. some eye-candy! lol. At least he came from Texas.. Jared and Jensen came from Texas.. Mmm.. I’m glad they’re giving someone without too much on their resume a chance. SG is really good with breakout actors.

Are they keeping the girls for last?

This guy really does sound like another John Sheppard.

So much for Rush being renamed David Read :P

Oh i am loving this!

EW.com has posted that David Blue from Ugly Betty will play “Eli Wallace, a total slacker who just happens to be an utter genius with anything he puts his mind to — mathematics, computers, video games. A lack confidence has left him with an acerbic sense of humor.”

justin louis and jamil walker smith are the other 2 actors. TV Guide

Did you ever think that the fans comments made a difference in the producers mind? we are after all the rating numbers.

well he looks pretty much how i imagined he would look, which is pretty much the only one i got right, well him and rush, the other 2 are completely different to how i thought they would look, i was think of more ‘manyl’ looking people to play young and ron, the people they have cast look a little ‘weak’

but this actor seems to fits the character to a tee. like a rough and ready version of Chris Evans, just without the makeup lol

Congrats!!!! We (friends of your dad’s) can’t wait to start watching you!

And yes, we grow good lookers in Dallas! ;)

What SamJackShipper93 said:
“I’m so relieved the actors are older than I thought they’d be! Hopefully it will help alleviate some of the teenage drama!

Oh, and I’m really glad they changed Dr. Rush’s name to Nicholas. To me David just sounded too much like Daniel.”

I really couldnt care less now who they cast in this show. I’m done with Stargate after the way they treated SGA.

B!! This is awesome! I can’t wait to see you on the Tube!! Have fun filming!!

Hm. He looks like he should be in a boy band.

What up B?! Do not know if you read this stuff…but your mom sent me the page. Looks cool brother. We are real happy for you my man. We will be avid Universe fans and can’t wait to see you on Law and Order (Kellie’s favorite show by the way). Love you and wish you the best.