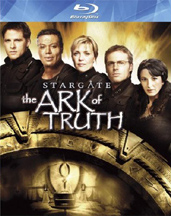 The followers of the Ori are on the march, seeking to convert or destroy our entire galaxy — and only SG-1 can stop them! Stargate SG-1‘s first direct-to-DVD movie, Stargate: The Ark of Truth, arrives on high definition Blu-ray disc today in North America.

The film was originally released only on DVD last March — before the high definition format war had been decided. It was followed in July by the simultaneous DVD and Blu-ray release of Stargate: Continuum.

Now Ark makes its way to Blu-ray, showing off all the space battles, Replicator takeovers, ascended being throwdowns, and team love you remember … but in high definition. Without the limitations of television production, the film reaches new cinematic heights following the 10-year TV run of Stargate SG-1.

If you haven’t already picked up Continuum on Blu-ray, you might wait for the double feature release of both SG-1 movies in one package, on Blu-ray and DVD March 3. Pre-order it now at Amazon and help support GateWorld with your purchase.

Cool – I think I will get the double pack! First though a Blu-Ray player would be nice!
Shame there are no extra features though!

Great! Can’t wait to see it in high definition. Continuum was fantastic on blu ray. Hopefully it won’t be a long wait untill they release it in the UK.

I’d like to point out this came out after the HD War was decided. Toshiba pulled out in Jan 08 and that was it, it fell like a deck of cards. By the time Ark of Truth was release in March bluray was already the clear winner. Better late than never (and you did get my 25.95 Canadian I just spent on it ), but I did want to clarify that, as I never understood why it wasn’t on blu back then. Hopefully not too many people are getting double dipped.

The question is; is it region free (like Continuum was, although the box didn’t say so) so that I can safely order it? Any European fans who bought this, I’d love to hear from you…

Sorry, not for me, not until they get rid of this abomination called DRM. Even though BD+ (the bluray DRM claiming to be safe for 10 years) has already been broken, ethically I can’t back this up. Sad, I really enjoy SG[1A].