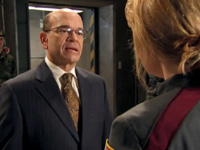 Richard Woolsey (Robert Picardo) takes command of the Atlantis base in the fifth season premiere.

As part of Hulu’s attempt to take over the world, ten episodes from the fifth season of Stargate Atlantis are now available to watch online … for free!

The first half of the season is available from now until May 23, from “Search and Rescue” to “First Contact.” According to the site, they have rights to show ten episodes at a time — implying that “The Lost Tribe” through “Enemy At the Gate” might become available after these episodes expire.

The Atlantis section of the site also features a handful of actor Q&As and other special features.

Sorry, international fans … due to distribution rights, online viewing at Hulu is only available for U.S. viewers.

The site is a joint venture from NBC Universal and FOX, and features a huge selection of TV and film — both new, first-run series and classics from years gone by.

(Thanks to IamJohn, Bethany, chase, Nathan and Heather for the tip)

That was funny. I like Hulu, they have Dollhouse eps too.

Why are they doing this???!!! Won’t this hurt the sales of the DVD’s and iTunes? Won’t this kill people’s interest in watching reruns on SciFi or wherever? Won’t all this thereby undermine the financial viability of the franchise and hurt the possibility of their making more movies? Does SciFi never intend to run the show again? I do not understand this at all.

I think that the prevailing wisdom is that making episodes available online for free, on a limited and temporary basis, actually helps DVD sales in the long run. It falls under the category of “promotional” for the networks. More exposure.

Haha. They could only take over the world if it was available for the world to watch. Unfortunately, you have to be in the US to watch hulu stuff. The US falls a little short of being the entire world.

so they take over the world… in the US only?? well then we of another world must find them elsewhere;)

Yeah, yeah, we all know it’s in the US only. So what? It’s the stupid channel companies’ fault, not Hulu’s. And I, for one, am absolutely ecstatic. I’m loving going back and watching these episodes, as well as recommending a free and legal way to get all my non-gater friends hooked on Stargate.

And for the record, I am one hundred percent definitely getting the season 5 DVDs when they come out. :D

For some reason this site (Hulu) does not work here in the UK.

Hulu is only available to those in the USA Dreadtech.. As those above you have just said!! lol. Lucky sods seem to get all the best stuff for free online.

Us Europeans will have our chance eventually though I’m sure… Well… We feckin better do! lol. ;)

I think it’s a great idea to put them on hulu. Now that the show has come to an end I would imagine this move will bring revenues in at a more steady rate through hulu advertising.

yey lets kill the dvd sales so we wont have to make the movie or put up with the actors…. i bet this is why they are doing this just like when they leaked some of the episodes on you tube of season five. man they really must hate this show. geez!