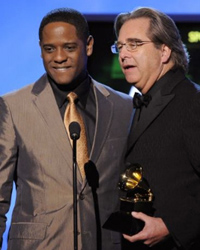 Is former Stargate SG-1 co-star Beau Bridges the next king of all media? The “Hank Landry” actor crossed over to the recording industry, winning a Grammy Award at last week’s big event.

It’s not the actor’s soft rock talents that brought the accolades, however. Bridges accepted the prize for Best Spoken Word Album for his work on the audio book version of An Inconvenient Truth, Al Gore’s 2006 documentary film about global warming. Cynthia Nixon and Blair Underwood also won the award.

Check out more results from the 51st Grammy Awards at Grammy.com.

Nice! Go Beau!
And just a little thing, the “Steven” in “Steven Colbert” is spelt like “Stephen” with a ph. not a V.

Ewwwwwwww and I thought he was an ok guy. but reall an inconvenient half-truth? seriously disgusting.

All political leanings aside, many many congratulations to Beau for lending his voice to what is after all a very worthy cause. He is a much loved actor and deserves this recognition. I respect his choice to want to do his part in making the world more Earth aware.