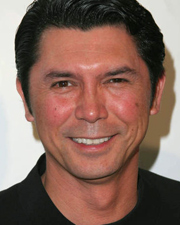 Veteran film and television star Lou Diamond Phillips has been cast on Stargate Universe, The Hollywood Reporter has just announced.

Phillips will play Colonel Telford, “a lifelong military man and the chosen leader of the ill-fated expedition,” according to the report.

Now age 47, Phillips stormed onto the acting scene in the role of Ritchie Valens in 1987’s La Bamba. He appeared in Young Guns and Young Guns II, Supernova, and many other films. On television, he has appeared on 24, The Twilight Zone, Law & Order: Special Victims Unit, and much more. He has a recurring role on Numb3rs, and in 2005 he collaborated with Stargate movie producer Dean Devlin on the SCI FI Channel miniseries The Triangle.

It is not yet known if Phillips will be a full-time, permanent member of SGU‘s cast — which already boasts the star power of Scottish film actor Robert Carlyle (“Dr. Nicholas Rush”) — or if he’ll be a recurring or one-off guest star. Stargate Atlantis launched with a big guest appearance by Robert Patrick (“Col. Marshall Sumner”), whose character was killed off in the pilot episode.

When reached for comment, an MGM representative refused to give up any such qualifiers on the Universe cast.

THR also confirmed that Universe is aiming for an October premiere in the United States (story).

MGM and SCI FI are expected to confirm today’s four big casting announcements with an official press release this week. Keep your browser locked on GateWorld and the Stargate Universe Launch Center for more on the new series in the days and weeks to come!

What do you think of the four new SGU cast members?
Call the GateWorld Podcast Hotline and let us know!
Just dial 616-712-1647 and leave a short voicemail
any time — day or night. Tune in to next week’s podcast
to hear what we and other fans think.

It would be awesome if he were a permanent member of the cast. He’s such a great actor.

Awesome piece of casting! Whether he’s a regular or recurring or just a guest star…to have him a part of “Stargate: Universe” is a joy!

Say what??? Lou Diamond Phillips???? Don’t get me wrong, I liked some of his films. But on Stargate… Alright, when it Jack Nicholson coming onboard? Or perhaps Jim Carry or Robin Williams???? This will bode interesting.

Totally unexpected, but very good news. Yet another reason to look forward to SGU.

Are you friggin Kidding Me? Lou is a washed up, overacting, stale actor. I certainly hope he is not a regular on the show. Robert Patrick should have made a plea to stay on.

I look forward to SGU, if for no other reason than they took away Atlantis, and scifi is the best genre.

Too bad that he wasn’t cast as Col. Nash, then I would have watched this show regularly. I think that he will be the Robert Patrick of this show, killed before the season premiere ends…

@Cheapshot, go fly a kite. Your comment is really offensive. Lou Diamond Phillip is an underrated actor if you ask me. I’m glad they got him but I am very afraid for the production of this show. I mean what is the budget per episode? But I guess since there is only one Stargate show on tv and Battlestar Galactica is signing off the SCIFI network will have alot of free salary caps available. I think I’ll give this show a shot now that they have some real stars on the show because let’s face it Atlantis had no real… Read more »

i love him in numbers.

Well i think it is a given not all of these will be permanent cast members. With the 3 women cast he make 9. someone will not survive the first 3 episodes( all 3 being the opening show)
I think he is going to be the Robert Patrick of this show. Chance are one of the other 8 will be killed of towards the end of the first year.
No permanent alien character? Thats a first for Stargate.

By the way i think Diamond Phillips is an OK actor, even though i do not think he will be permanment cast meber, i wish him well on the show.

I hope this guy becomes a regular. With many people already putting Universe down, we need established actors to lift the series off the ground. This guy fits the bill.

This is definitely a surprise and more in line with what most of us were probably expecting when they said they were looking for a “household” name for the show. Not everything he has done has been great, but overall, I like the guy and I thought he did a great job in “The Triangle” miniseries.

Is he still doing “The Cleaner” or did that get cancelled already?

Benjamin Bratt in doing “The Cleaner”.

I like all the casting and I am looking forward to October.

I always mix those two up!! Why do I do that?

How can the “leader of the expedition” be a guest-starring role???

As long as he can continue recurring on Numb3rs from time to time…..

I do have to say… he was alright in La Bamba. I would like to see what he can do with this role.

I agree. La Bamba was badass. He also did a real good job acting in The First Power. I hope he can bring his A game to SGU. Just like Mickey Rourke, I’m feeling a comeback…

I see where your going with this but I think Young Guns was the role that made it for him. I would like to see you prove me wrong on that one Mr. Know it all.

Wait a second…First William L. Peterson and CSI, then Keifer Sutherland with 24, Charlie Sheen in Three and a Half Men, and now Lou Diamond Phillips in SGU. The Young Guns cast is making the jump to TV! Whats next? Emilio Estevez in the upcoming fall show: Repo Man the Series?

How exciting! Hearing this has made me more eager for SGU :) I love him in numbers and 24. I really hope he is here to stay. Please please don’t kill him off!

This is a very surprising and welcoming news. Lou is a great and proven actor, good charisma and also has a great sense of humor. The SGU people made a great choice of bringing him on the show..I know everyone will love him and new viewer will embrace him just as we embrace and accepted John Shepperd on the early shows of SGA.

yes i agree with “efilonyug” but do not compare him to john sheppard hes so hot! any how, such an amazing actor why would he want to do this show? when he can do movies in hollywood. just weird and for the dr how came out on er the same question i dont see shane west on sci fi hes making movies and he also came out on er. i guess she just wanted to do something different.jmo

i’m sorry “mrs. john shepperd” , i’m not trying to disrespect the coronel, just stating the fact that he was not a known actor before SGA but overtime he did capture our love..but for lou he dont have to prove himself…cant wait to go through the gate again and board the destiny

What Cheapshot and katikatnik said…

LDP is a professional Bad-Ass. I hope on some planet they run into some snake-heads so he can show you all how BA he really is.

Ya know, this could work, this could actually work. LDP as Col. Telford…. and if he plays it like Col. Sumner, a real hard nosed career soldier whose bible is the chain of command, we could actually see some interesting dialogue between him and RC’s Dr. Rush. Provided the Doc is a bit of Rodney’s egomaniacal genius, O’Neill’s irreverence and throw in Carson Beckett’s timidity, you could have a recipe for sparks to fly. Telford could be a closed door, brooding, direct, clipped. They could unravel his reason for being over time. And Rush could be struggling with the longevity… Read more »

Lou is awesome. I think he’s perfect for the military role. He’s not only motivaated and respectful, he’s also kind and calm. He’s a good guy playing a good guy.perfect.