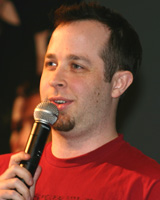 After five years of calling Stargate home, Atlantis Writer/Executive Producer Martin Gero is hitting the Big Apple to help develop Bored To Death. a new series which has been greenlit by HBO.

Though the future looks bright, Gero says saying goodbye to Stargate, at least on a full-time basis, was not an easy choice.

“I certainly didn’t want to leave,” he told GateWorld. “I don’t think they wanted me to leave. They offered me a generous offer to stay on as a consulting producer, which I will be for the first eight episodes. Basically the idea was ‘Let’s play it by ear.’

“This should be said somewhere — those guys certainly don’t need my help,” he said. “It’s very nice of them to keep me involved just out of my own interest and curiosity and passion for the show. There is some extraordinarily capable guys back there. Especially now that Brad and Rob are back on a full-time basis, they’re covered there.

“[Stargate Universe is] a different type of show. They’re excited about it. But again those two guys have a very clear idea of what they want to do with the show. And so far I think they’re executing it perfectly. First day of production is today, so we’ll see.”

Gero’s original plan was to move to Los Angeles to pursue other potential writing opportunities, while staying on as a consulting producer for Stargate. But the offer from the team at Bored To Death was too good to pass up.

“I was not looking to get staffed on another show, but this show was just too good to say no to … It’s a really small team. I met with HBO and the producers about it. It was a show that I had read and got pretty excited about. I feel very fortunate that I was included on a very, very small staff.”

In the series, actor Jason Schwartzman plays Jonathan — “a version of the novelist Jonathan Ames, who created the show,” Martin said. “His girlfriend’s just left him and he’s worried about writing his second novel. [He] decides he’s going to start becoming an unlicensed private detective. So he puts an ad on Craigslist and we go from there.

“It’s a dramedy,” Gero said. “I feel like I’m a good fit. [Ames] refers to it as a “noirotic.” It’s a neurotic noir. It’s going to take place all over Brooklyn, New York and New Jersey. It’s quite the show. The pilot’s very, very good. If we can just keep that up I think we’ll be on to something.”

The pilot to Bored To Death was produced last summer and fall, and HBO has picked up the series for an initial eight episodes, each a half hour long.

Before departing Vancouver Gero penned “Earth,” currently the sixth episode of Universe. But he is keeping his options open to writing again in the future.

“I had an extraordinary experience at Stargate and was there from kind of the beginning of Atlantis to the end,” he said. “There was a roundness in that for me. Those guys, they’re so extraordinary and generous with their time, allowing me to make the film [“YPF”] in the middle of that.

“But realistically moving forward, it was getting increasingly difficult for me to go off and pursue my own thing. They’ve always been very, very supportive of me doing that.”

Sod that, When are we going to know who the two female cast members are going to be? Or have there characters been drop from the show?

He actually seemed like a really cool guy, some of his episodes were good I can’t remember that many of them though.

He gave us some of the best,(and also a few of the worst)episodes, IMHO.
I wish him luck with his new gig.

I think Gero wrote The Storm or The Eye, which were basically the episodes that made me like the show. Of course, I came to dislike the show a little over a year later, but that’s besides the point! It was one hell of an episode and I have Martin to thank for that. Good luck out there, bro.

sigh :(
no more funny behind the scenes moments

It’s always sad to see someone as talented as him go, but then again, he is right that we have two great writers on board — Brad and Rob. Now that they are back on full time (at least for now) we don’t have to worry about Stargate. I still hope they hire me…*cough* I mean new blood. (lol).

So Gero won’t be writing any more Stargate related episodes. That’s great news for Universe and just may be enough to get me to watch! Too bad Gero didn’t move to New York before he destroyed the final season of Atlantis with McKeller.

Good luck Martin but sorry to hear that you have to move to Los Angeles, I would not live there even if you paid me to.

At the same time people…this is not Stargate sg1, SGA…its new and in other words….boring…and a no brainer. I would rather watch repeats of Atlantis..and sg1. you cant take stargate away from time travel, worm holes etc..weapons, action, characters. All one needs is characters (good real actors!) but with space travel and most of all…the stargate. But its sad to see him go..thats a big thing. It means he has know hope in the future of universe and he said, these directors know where they want to go…..well they may have an idea where they want to go..but dont forget… Read more »

that is so sad to hear hes so funny and cool. when the fans went to protest in cananda he was outside with them . so sad to hear this news but i bet he will be better off in NY than in canada hopefully they appreciate his work there. as for sga i still feel bad for there cancellation , i heard joe f. is getting some pretty interesting offers hopefully he decides to get something soon so we can see mr sexy flanigan back on tv.

Well, he could try writing something not so run of the mill – then he wouldn’t be bored to death – nor would we – *ba bum* ;)