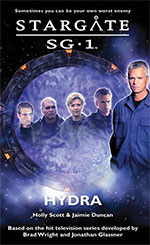 Fandemonium’s Stargate SG-1: Hydra has been tapped by the Scribe Awards as an example of excellence in media tie-in fiction!

The novel, by Holly Scott and Jaimie Duncan, is not the first Stargate title to be nominated for a Scribe Award. Stargate Atlantis: Casualties of War, by Elizabeth Christensen, won the award in 2008 for the same category.

Also nominated in the speculative fiction original category are Ghost Whisperer: Revenge, by Doranna Durgin, Ravenloft: The Covenant, Heaven’s Bones, by Samantha Henderson, and Star Trek: Terok Nor, Day of the Vipers, by James Swallow.

Rumours and accusations are reaching Stargate Command, and nothing is making sense. When SG-1 is met with fear and loathing on a peaceful world, and Master Bra’tac lays allegations of war crimes at their feet, they know they must investigate.

But the investigation leads the team into a deadly assault and it’s only when a second Daniel Jackson stumbles through the Stargate, begging for help, that the truth begins to emerge. Because this Daniel Jackson is the product of a rogue NID operation that spans the reaches of the galaxy, and the tale he has to tell is truly shocking.

Facing a cunning and ruthless enemy, SG-1 must confront and triumph over their own capacity for cruelty and violence in order to save the SGC – and themselves…

Stay tuned to GateWorld for an upcoming exclusive interview with Holly Scott and Jaimie Duncan, when we go behind the pages of SG-1: Hydra! 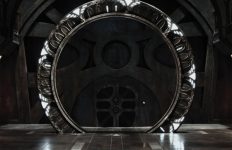 SGU heats up Steppin’ Out magazine→

This novel seems quite intriguing

It is very good. Finished reading it a few weeks ago. One of the best Stargate novels i’ve read. If you want to give the Fandemonium books a try I would definetly recommend this as one of the books to get first. The SG1 ‘The Barque of Heaven’ novel is also very good.

I didn’t like this one at all, myself. It’s very dark, and moves a long way from the tone of the series. Really liked ‘The Barque of Heaven’, though…
One problem with most of the books, is that they ramp up the conflict and angst, but leave the humor out entirely.