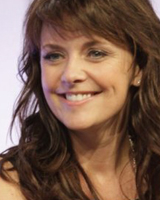 The SCI FI Channel today confirmed a long list of guest stars for the upcoming spin-off series Stargate Universe. Included in the announcement is the news that Stargate SG-1 and Atlantis co-star Amanda Tapping (“Samantha Carter”) will make a guest appearance on the show.

It is not yet known which episode Tapping will appear in.

Tapping’s own series, Sanctuary, will begin its second season this fall, likely airing alongside SGU.

SCI FI also officially confirmed the casting of actor Christopher MacDonald, giving us the full name of his character: Senator Alan Armstrong. The Senator is the father of Chloe Armstrong (Elyse Levesque), one of the show’s main characters.

The network has also announced that veteran actor Carlo Rota has been cast in the role of Carl Strom. This is probably a renamed “Dale Strom,” who as we previously reported works for the I.O.A. (International Oversight Advisory), the organization that oversees all things related to the Stargate program. SCI FI tells us that the character is actually the head of the I.O.A. — making him the guy to whom people like Richard Woolsey and Shen Xiaoyi report.

Strom appears in the show’s fifth episode, “Earth” — though his first appearance on Stargate Universe might come sooner.

Finally, in something of a first for the Stargate franchise, the network announced that Grammy-nominated recording artist Janelle Monáe will play herself in an upcoming episode and will perform two songs from her new album Metropolis: “Many Moons” and “Sincerely.”

Stargate Universe is now filming for an October premiere in the U.S. (SCI FI), U.K. (Sky1), and Canada (SPACE)! Learn more about the new series in GateWorld’s SGU Launch Center.

(Thanks to Morjana, Lugh and Dafsxxx for the tip)

LOL indeed but not at the guest stars. It’s for the O’Neil with one L in the press release :P

Dude, Carlo Rota is ultimatt bad-a$$! The line of great stars continues to grow. I’m stil (one L.. haha) very excited for this show. Should be a great mix of all things awesome.

I’m no expert on “Universe,” but I thought the whole premise of the show is that the characters are stuck on a ship, randomly gating from one place to the next, and not in control. If that’s the case, how are they going to continue running into familiar Stargate Command people??

I was on the fence about this series but now clearly they’re going the way of 90210 and The OC in space: they’re having pop stars play themselves and perform. How lame is that? Smells like teen spirit…which means it smells like sh*t.

jyh, they are going to use a method of communication seen on Stargate before to tell an ongoing arc of Earth stories while still on the Destiny.

Very interesting that they’re bringing in Carter. All we need now is Teal’c.

On a more serious note regarding their continuing to run into familiar faces, it’s probably either flashbacks, or the action is alternating between the Destiny and Earth with the SGC trying to figure out what happened to the team. The latter is more likely.

BRILLIANT!!! FANTASTIC!!! AWESOME!!! COOL!!! First Rick and and Michael and now Amanda guest starring…I am waaaaaaaaaay above and beyond Cloud 9 with this news!!! Bring it on!!! :D :D :D :D

*sigh*…after all these years, they still can’t spell “O’Neill” right? Oh wait…waht if they’re referring to the O’Neil from the original movie? o_O

I’m happy that Daniel and Jack and Sam are all guest starring! Is Sam gonna die her hair blonde again? Cos it would be kind of cool to see her with dark hair on Stargate. :P

The thing that comes to mind for me is some of them have been cast beyond the first episode. This is going to mean a) regular-ish flashback type scenes, not something done a lot in stargate.

b) Some sort of tie to earth beyond them going through the gate.

sam/amanda’s going to be on?…

I thought the premise of the show was that it was one-way gate travel. Can’t the people on Earth still dial the gate to the ship but not the other way around? Cannot they send supplies and whatnot to the ship but not back the other way? Presumabbly that means that earth can communicate with the ship. But knowing that they can let earth know what is happening aboard ship but can’t return home would be really frustrating to the crew. If i knew my kid was growing up without me but I could never see him/her again would be… Read more »

It’s all great news, but…

WHERE IS CHRISTOPHER JUDGE?

….And As Always….
Have A Very Stargate Day!

I just checked out those Janelle Monáe songs… They’re terrible, I hope they are only used as background music at a restaurant or something.

Great. As long as they do also get Chris Judge. He is definitely part of SG1, and became one of my favorites! Hope he doesn’t get excluded!

I liked Carlo Rota character in 24.
I wonder what they are going to go about Carter’s hair?
Call me crazy but I’m going to assume that not only is that gate one way but they only have enough power to dial once.

I am a tad worried about Janelle Monáe playing herself.
To me celebrities playing them selves in TV shows always seemed fake, but I’m not going to go on about that until I have seen a few episodes call me a hater if you will but I’m still unsure on this series.

@jyh
I don’t think they are I think the whole point is that they will be in the pilot and flashback.

And it’s nice to see Carlo Rota in the cast list- he’s my favourite part of Little Mosque on the Prairie!

arghhhhh! They really are trying to get me to watch this thing aren’t they?

I’m sorry…no amount of stunt casting will drag me into this “thing” they call SGU. I don’t like soaps.

@Pippin, my sentiments exactly.. Throw a hook with flashy lures (in this case, our favorite actors for a 30 second cameo), and see who’ll bite..

@US06154 You could watch the clips with them in on youtube and if it really doesn’t look like BSG or a soap (why wouldn’t they show that in the trailer) then you can watch the episodes on TV, but I think it will be shame :(.

“Call me crazy but I’m going to assume that not only is that gate one way but they only have enough power to dial once.

Hope they don’t pull that old cameo trick where they strut though with a cup of coffee saying hi, and just passing through…

I was really excited about SGU (the cast is good and the style looks edgy and dark from what I’ve seen). Until, that is, this singer playing herself thing – that is just so Gossip Girl/90210/Las Vegas. Not only is it lamer than a horse that’s been quadruple kneecapped, it just doesn’t fit in with a Sci-fi show at all. Is there going to be a cheesy scene at the end with everyone on the Destiny getting down to her latest hit? Utter idiocy.

Regarding the singer, I think you’re reading far too much into it. More than likely she’ll in for a scene on Earth in a club or some place where some or all of the main characters meet in the pilot or used as flashback later on in the season. 1 singer does not make a show like 90210.

Dragging in these SG-1 characters for universe is like tying a steak to an ugly baby so the dog will play with it.

I wonder if they will be taking a page from LOST and doing flashbacks with all these characters.

talk about messing up the show.

OMIGOD. We are going to have singers playing themselves on the show? What for? It was fine when they had scientists like Bill Nye, etc. on. But singers? Really? Is this the best they can do? And why are we raiding the SG-1 cast? Can’t this show stand on it’s own? Sorry, but I am still on the fence about this new series.

if they need all the sg1 team together to kick start sgu off that’s telling me somthing about this sgu show……..that i thought would happen as soon as i heard about sgu…….

Fantastic!!!!Richard, Amanda ,Michael…And Ben??? Yes,BEN BROWDER.Come on! Producers,Sci Fi !!Don´t forget him.You must call him!He worked 2 years in SG1 and also he was part of the team.He´s a brilliant actor!!!!!!

She’s a terrible singer!!! They should pay her NOT to be on the show!!!! No Atlantis people??? This show sounds like BSG…