UPDATED: Children of the Gods – Final Cut is on DVD in the U.K. on July 27, according to retailer reports.

Details on a pair of upcoming Stargate DVD and Blu-ray releases are finally available, thanks to our friends at TVShowsOnDVD.com! MGM and Fox Home Entertainment have announced the release dates for Stargate SG-1: Children of the Gods – Final Cut (DVD) and Stargate Atlantis: Fans Choice (Blu-ray).

The release of the re-edited Stargate SG-1 pilot movie “Children of the Gods” will be available on July 21 in North America (Region 1). Series co-creator Brad Wright and editor Brad Rines revisited the show’s original pilot, completely re-editing it from the original dailies — choosing different takes, adding deleted footage, and expunging the nudity. It will also come with a new score and new visual effects. (Read more in our 2008 interview with Wright.)

The 90-minute film will come with a suggested retail price of $26.98 (U.S.). It includes a commentary by Wright (and actor Richard Dean Anderson, according to Wright), a bonus featurette, and a trailer for Stargate Universe. UPDATE: According to the BBFC, the featurette is titled “Children of the Gods: Back to the Beginning,” and has a running time of 7 minutes 23 seconds.

Here’s the cover art for the highly anticipated re-release (look for a larger version at TVShowsOnDVD.com: 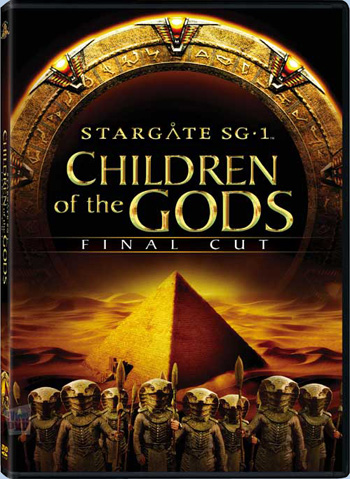 Children of the Gods – Final Cut is also coming to Australia (Region 4) on August 5. EzyDVD.com.au lists it as a 3-disc set, though we have no confirmation that this is the case or any idea as to what might be on those other two discs. The cover art there is the same, and the site offers this description of the bonus featurette:

“A behind-the-scenes look at why the producers wanted to redo the pilot, including commentary explaining all of the changes/updates!”

Next up is the first Blu-ray high definition release for Stargate Atlantis. The Fans Choice disc includes extended versions of the 2-part series premiere, “Rising,” and the series finale, “Enemy At the Gate.” It’s set for release two weeks later, on August 4. The episodes were voted on by fans, and the cover art (still to be announced) will be fan-designed (site).

The Blu-ray disc will be priced at $29.99, presented in 1080p widescreen video with English 5.1 DTS HD Master Audio. No additional bonus features have been announced yet.

(Thanks to AusGamerForever, Morjana, TraK90, apk51, Alan and Iain for the tip)

I’d like to point out that the cover art for shown at EzyDVD isn’t the final cover for Australia, as it doesn’t have the required (and ugly) ratings information. As for calling it a 3 disc set… not sure, but it would help explain the $40 price (for those fortunate enough not to live here, new release movie DVDs are usually $30).

Once again the EzyDVD website delivers: http://www.ezydvd.com.au/item.zml/806167 <- Complete Atlantis series collection! The ‘cover art’ has changed since I last checked it.

“(Thanks to AusGamerForever, Morjana and apk51 for the tip)”

Lets not forget “Trekky” who gave us the first Heads-Up” via the Gateworld Forums! ;)

I sent this info in around 2 weeks ago :P can’t wait to see the final cut :)

I just love this stuff but it is a bit pricey for old episodic TV. What happens is everyone try’s to make an extra buck on the old good stuff. How about the new Gate movies we were supposed to get?

I thought that the Atlantis fans’ choice dvd was supposed to be 5 episodes? I vaguely remember voting for 5 eps, (Rising, Mckay and Mrs. Miller, First Strike, and Enemy at the Gates). Will still pick this up though as I’m interested in the “extended” editions of the episodes.

not crazy on the box art though

Sorry, I might have missed something here the,
BUT is the extended version Atlantis only on Blue- Ray??? coz if it is what about those of us that dont have blue ray thingy to play them on?????. So does anyone know if this will be on DVD and available to play in the UK????

@AtlantisRocks…
Yes! Look it up on Play.com! Due for release 27th of July! :)

I can’t wait to see the final cut of CoTG. *bounce*

Not interested in SG-1 stuff, but I’m very looking forward to the SGA disc. I hope it comes with some SGA bonus material.

Stargate SG-1: Children of the Gods – Final Cut is a waste of time. He could have been doing something productive, instead he’s just censoring out things.

The cover art for Final Cut looks stupid too – with those Jaffa all standing together like that. It may say “Final Cut” but the final cut for me was the original, this is just like a remix to me.

Finally, they are taking chapter from Battlestar Galactica playbook. Personally, I’m glad. I think the DVD versions of ANY series should have the episodes in their UNCUT original intended order, not the 42 min length of the TVs. Saying the nude scene in the pilot didn’t fit would be an understatement. I’m glad they are getting rid of it, now I can watch it with others without feeling queasy. Like the scenes in Battlestar are fine, the tone of the show is like that but not SG. The episodes I really want to see them release as movies with extended… Read more »

If they’ve essentially re-mastered Children of the Gods from the original footage and created new FX and Music, then why on God’s earth have they not made a Blu-Ray version? It’s my understanding that film has a much higher resolution than 1080p and usually its the costly high-def CGI stuff that holds production back from Blu-Ray. As they have taken new cuts and re-done the effects, it seems like a no-brainer that Blu-Ray would be the ideal home for the new cut. Please correct me if I’m wrong.

Finally! I’ve really wanted to get some mates into SG-1 but really didn’t want to give them the pilot with the nude scene. It made the complete collection an 18s for that one scene. A Region 2 UK release would be great please!

Douglasn7, you did read the entire article didn’t you? It clearly says a UK release is coming. “UPDATE: The movie arrives in the U.K. (Region 2) on July 27, according to Play.com.”

Not hugely impressed by the cover, I didn’t really like that arc of truth one either, the box sets have good simple cover art but it’s something about the font on this and the arc of truth DVD I just don’t get.
It doesn’t matter, I’m sure the content is great.

I completely agree with you RYSTER, why the H*** aren’t they releasing a blu-ray version?! Doesn’t make any sense. That’s the reason I am uncertain if I am going to get the Children of God DVD, because I don’t want to buy it and then a year later have the Blu-Ray version show up on the market. The difference between blu-ray and DVD is like night and day. Would definitely buy all SG1 and Atlantis seasons if the came out on blu-ray.

Same here… I’d love the entire STARGATE and BATTLESTAR in BLU-RAY.
Sighhh… now if they would only release BABYLON 5 with updated VFX for BLU-RAY and the FARSCAPE !!!
These 4 are easily the 4 best sc-fi TV shows.