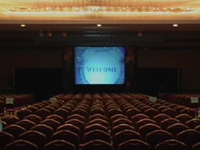 Well it’s about time! After weeks of slaving our way through the Region 1 boxed set for Stargate SG-1: The Complete Series on DVD, Monday June 15 marks GateWorld’s final set of screen grabs for all of its exclusive special features. And it’s a whopper — nine albums of nearly 2,500 new images.

Let’s skip the preamble this week and go straight for the rundown of what is included in this latest batch!

Beyond the Gate: Michael Shanks Convention Experience (411 images) – Chronicles the adventures of Michael Shanks during the 2004 Creation Chicago Stargate convention, as well as a separate, candid interview with Michael regarding the convention phenomenon and its attendees.

Beyond the Gate: Amanda Tapping Convention Experience (334 images) – Two birds with but one stone! Amanda Tapping’s visit to the 2004 Creation Chicago con is also covered in this set, and features an interview with Amanda discussing conventions.

Richard Dean Anderson: My Life as a Mime (52 images) – RDA briefly summarizes his escapade as the “worst mime in history” in this quirky sketch.

Video Diary: Richard Dean Anderson (276 images) – Missing from the Region 1 Season Six boxed set, RDA shows us around on location for the shooting of “Paradise Lost.” Includes footage with actor Tom McBeath, Director William Gereghty and the crew during O’Neill’s final confrontation with Maybourne, as well as a lighthearted moment inside Rick’s trailer.

Video Diary: Don S. Davis (155 images) -The late and great Don Davis introduces us to his pals on set during the production of Season Five.

Video Diary: Teryl Rothery (212 images) – Teryl takes us through a typical day at work during Season Five’s “Rite of Passage,” arguably the best Janet Fraiser episode of the series.

Thanks for sticking with us through the past through weeks as we worked our way through the four bonus discs in the Complete Series set. Now on to the “Stargate” Ultimate edition DVD set, and then 10 seasons of SG-1!

…when does it come out on Blu-ray? :D