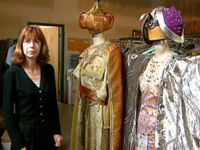 Onward and upward! With the Stargate Ultimate Edition DVD  features in the bag, we turn our attention toward Stargate SG-1 DVD special features in the GateWorld Gallery. This week we are dipping into SG-1 Season One!

As far as Region 1 was concerned, the first season of SG-1 on DVD included five featurettes and one Easter egg. The 288 images from six galleries are broken down below.

“Ra” Easter Egg (8 images) – Hidden on the first disc of the Region 1 set, a voice-over and scrolling text explore the origins of Ra, naturally with an image of Apophis glowing in the background. …

Behind the Scenes With the Producers (26 images) – This segment contains interviews with SG-1 co-creators Brad Wright and Jonathan Glassner, plus brief moments behind the scenes during production of Season One.

Cast and Crew Featurette (90 images) – This segment includes interviews with all five principle SG-1 cast members along with Wright and Glassner, behind the scenes footage filmed during “Children of the Gods” and the SG-1 model shop hard at work on settings and props for numerous Season One episodes including “Brief Candle” and “Thor’s Hammer.”

Costume Design Featurette (52 images) – Costume Designer Christina McQuarrie sits down for an interview, as well as takes the cameramen through her department to show off various costumes, including Amonet’s gown from “Children of the Gods.”

Profile on General Hammond (60 images) – Don S. Davis reveals how he came to Stargate and his thoughts for the role of General George Hammond in this featurette.

That’s it for this week. Thanks for being patient. Stay with us next week as we proceed up the long ladder with SG-1 Season Two special features!